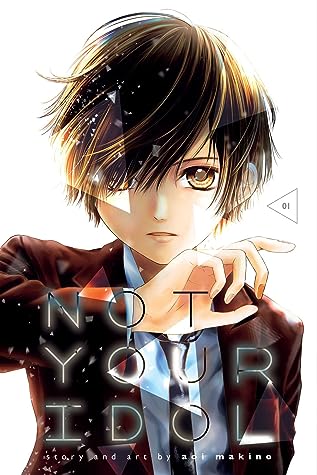 A psychological suspense series about a girl who has given up her life as an idol after being assaulted by a fan.

After that day, she stopped being a girl. In the wake of an assault, Nina Kamiyama, a former idol in the group Pure Club, shuns her femininity and starts dressing as a boy. At high school she keeps to herself, but fellow student Hikaru Horiuchi realizes who she is. What secrets is she keeping? The shocking drama starts.

Nina Kamiyama left her idol group Pure Club, renounced her identity as Karen Amamiya, and began to live as a regular girl after a ‘fan’ attacks her with a knife at a fan meeting event. Now, six months later, she mostly flies beneath the radar in her high school, dressing in pants (her school allows girls to wear uniform pants if they choose), and cutting her hair, to make herself as unnoticeable to boys as she can. She sees the boys’ comments on other girls as a reaffirmation that they are an awful species, but there is one exception – Hikaru, from the judo club, who only seems interested in judo and bodybuilding, and doesn’t make sexist remarks like the other boys. Even though he guesses her identity, she feels safe because he confesses about his younger sister being a victim of sexual abuse, and that she is her fan. However, since her attacker hadn’t been identified or caught, she lives in constant fear of a repeat attack, and when her friend from the group puts doubts on Hikaru, she is stuck between doubt and the feeling of safety she has in him.

For a first volume, it packs a lot of plot into it. We are introduced to Nina’s current life, her past life, her friendship with the girls in the group, the decision that led to her leaving the group; also we are introduced to her high school classmates, the boys who deride her for dressing as a boy, the popular girl who knows how to play her audience, and who may have it out for Nina, a groping incident on the train and conversations about rape culture (the whole ‘girls dressing in short skirts are asking for it’ thing as well as the ‘fake accusers’ thing). I liked the nuanced conversations about what is being asked of young girls, as well as how they feel conflicted about it, and also the exploration of Nina’s mental state, and her decisions. The artwork is nice, though sometimes the eye size thing varies between front and size profiles. The tone is serious, but also has time for humor at times; the mystery of the identity of the attacker may dominate the plot, but I feel its strength lies in how it relates the consequences of the attack on Nina’s psyche.

One thought on “ARC Review: Not Your Idol, Vol. 1 by Aoi Makino”