Diving into the Known is a new series contributed by the new addition to the YomM team, Ozhasbooks. Oz will dive into the countless popular books that came out throughout the ages from different genres that surprisingly enough, he didn’t even bother to read yet! Can you believe it? What a dork ;p 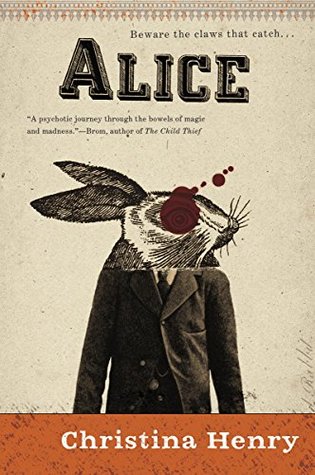 In a warren of crumbling buildings and desperate people called the Old City, there stands a hospital with cinderblock walls which echo the screams of the poor souls inside.

In the hospital, there is a woman. Her hair, once blond, hangs in tangles down her back. She doesn’t remember why she’s in such a terrible place. Just a tea party long ago, and long ears, and blood…

Then, one night, a fire at the hospital gives the woman a chance to escape, tumbling out of the hole that imprisoned her, leaving her free to uncover the truth about what happened to her all those years ago.

Only something else has escaped with her. Something dark. Something powerful.

And to find the truth, she will have to track this beast to the very heart of the Old City, where the rabbit waits for his Alice.

The world was abruptly sharp and clear, too clear, and too alive. It was terrible beyond words.

Fairy-Tales retelling are popularized genre in fiction. I think It became far more wide known thanks to the television series, Once Upon a Time (Which is one of my favorite series, what can I say? I’m a sucker for it) and in the early 2000s and 2010s it boomed with so many new iterations of your beloved fairy-tales in a new and exciting new takes. Alice in Wonderland by Lewis Caroll are nothing new with this type of genre. It is probably the most known one with so many retelling works like, The Looking Glass War by Frank Beddor, Heartless by Marissa Meyer, Splintered by A.G. Howard, Automated Alice by Jeff Noon, After Alice by Gregory Maguire, Alice in the Country of Hearts Manga series and the most notable work in video games, American Mcgee’s Alice. So what could possibly be refreshing in this tale? What can author do with the Alice LORE and keep their readers intrigued by it? Thus comes Christina Henry and oh boy, what did she created.

If you go chasing your freedom your fate will only follow you there, and force you back.

Alice is locked up in the asylum for her own sake they said. She’s not well, they said. Her parents won’t visit her because her mind isn’t safe. And then she gets out to this strange apocalyptic world. Through her eyes we get to venture in a extremely unique world divided with colorful gangsters making the lives of the citizens awful. She not only have to deal with her memories not making sense, a mysterious monster after her, trying to chase this rabbit that damaged her and her partner, Hatcher who’s a murderer and not entirely sane. You could tell that this story has a lot to unpack and you certainly feel the magic of Alice in wonderland in this dark re-imagining. It is gritty, downright scary and sometimes I just wanted to stop but couldn’t because how could I? It’s like a medical drug. You know it’s good but overtaking it from the recommended dose will do unrecoverable damage.

Could the world really be this terrible? Every step Alice

Christina writing is both poetic and macabre the way she details Alice’s view of the world and the people she meet along her journey with Hatcher. She doesn’t shy to make you uncomfortable and emotional with how much Alice on her plate. So much and yet she never stop going forward and developing with Hatcher’s who past is in fragments and under the influence of dark forces making him a liability. I wasn’t sure what the story was heading towards, the pacing was all over the place and you felt so disoriented as Alice, perhaps intentionally due to the fact that this is a retelling of a story all inside a child’s mind. Christina makes you feel hopeful in this god forsaken world. I certainly wouldn’t want to live in it.

There was comfort in ignorance, in thinking the world a certain way and not knowing any different.

It’s undeniable by now why this book is so popularized and for a good reason. It is a crime thrilling story that you can’t put down and you have to devour the pages until you reach the conclusion despite how nasty it getting. I can’t entirely talk about Alice because due to how heavily engaging it is, its better going into this story blind. The story is lavishing and unforgivably dark with intriguing morally gray main character, a interesting world setting, magic system and thought provoking lore and a little bit of a hope that the sequel will be just as good as the first book, because I am all here for Christina Henry and her retelling books. She seems to know how to do them and I hope you’d enjoy them too 🙂

Ruthsic’s take on the book:

Okay so I hadn’t read this either, though I had seen it earlier and never added it (probably because of that cover lol, it just didn’t vibe with me). Anyway, I had been seeing her other novels on Scribd (mainly Mermaid) and saved them to read. When Spira made this post, I thought I might as well read it, too, since I am a retellings nerd. Now, before this I had read Splintered, which is also a dark retelling with ‘Alice’ having ‘gone mad’ after her stint in Wonderland; I had also read A Blade so Black, which is a bit violent, and has humanoid versions of the Wonderland characters. So, I was like prepared for a ‘gritty’ retelling, I should say.. Anyway, here’s my review: 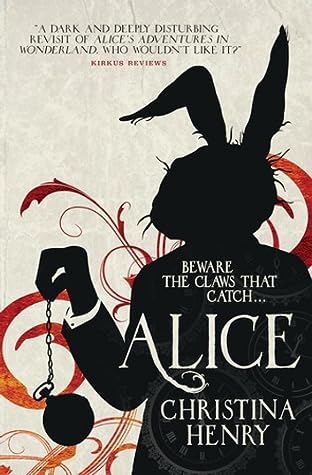 Alice by Christina Henry
My rating: 4 of 5 stars

I have read a couple of dark retellings of Alice in Wonderland, but this one is the most violent and brutal. This is strictly not a retelling, but an after-the-end kind of story mixed in with characters and concepts of the original: Alice, who has been in a mental institution for a decade since her return, is missing most of her traumatic memories from there, and now, when she and a fellow inmate, Hatcher, escape from there during a fire, they are tasked with stopping a threat to their world at large, the Jabberwocky. Alice and Hatcher have to go across the Old City to find something that would help them take down the Jabberwocky, while also encountering the characters from the original tale, who are mob bosses in this world.

The setting is sorta Victorian-ish, though the city they live in is divided into Old City and New City – the former being a haven for criminal activities, and the latter being the neighbourhood where the elite reside, and where inhabitants from the Old City are forbidden entry. People in the Old City are trapped, and live in fear from the mob bosses that rule over them, and the territorial battles between them. Alice and Hatcher get out when another such battle is gaining steam, and getting through the city is already complicated enough, but combined with the violence in the air, Hatcher’s violent surges, and the Jabberwocky stalking the streets, it is dangerous for them. Additionally, women in the Old City aren’t safe, like AT ALL, and are either under threat of assault, or being taken to be sold into sex slavery. Alice, who has flashes of her being raped by the Rabbit, is already stretched thin with terror and fear, and while she has Hatcher at her side as a dangerous enough bodyguard, she also wants to be able to protect herself. Also, she is a reluctant party in this quest as she had hoped for a peaceful existence after her escape, but is instead having to drag herself through this bloody and brutal city’s internal battles.

The magic aspect of the story comes in short bursts, gaining prominence later on in the book. Characters such as Chesire, Rabbit, Catterpillar, etc are all dangerous mob bosses, and with the exception of the first, all deal in the sex trade, among other things. This means that Alice is frequently walking into triggering situations, especially Catterpillar’s place where, well – it is a horrific place and was quite disturbing. Hatcher has his own fractured memories to contend with, as well as the fact that the Jabberwocky being nearby affects him immensely; Alice is a little scared of him because he has a hair trigger on his violent streak. The relationship between the two wasn’t immediately apparent at the start (it seemed more like they were bonded by shared trauma in the institution) but it soon becomes obvious it is romantic in nature.

The ending brings some interesting twists, and while I liked most of them, I was sort of underwhelmed with how the big bad was defeated? It was a bit unexpected, yes, but also not much to do with her story arc exactly? I, however, did like, how the story starts in a very dark place with just one bright spot for Alice, and then as we get to later in the book, the ‘Wonderland’ elements have some more brighter spots like Pippin, almost as if the brutality of the place and its existing magic is slowly being mixed in with the lighter wonder of magic.

Finally, I would like to reiterate the warnings above, that the book can be triggering and upsetting, so please pick this book with caution. But if you do, it is a well-written fantasy retelling.

One thought on “[Diving Into The Known] Alice by Christina Henry”