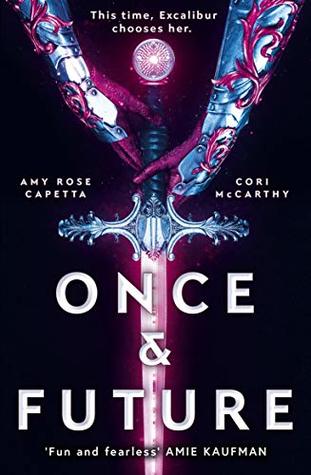 Once & Future by Amy Rose Capetta
My rating: 4 of 5 stars

I’ve been chased my whole life. As a fugitive refugee in the territory controlled by the tyrannical Mercer corporation, I’ve always had to hide who I am. Until I found Excalibur.

My name is Ari Helix. I have a magic sword, a cranky wizard, and a revolution to start.

When Ari crash-lands on Old Earth and pulls a magic sword from its ancient resting place, she is revealed to be the newest reincarnation of King Arthur. Then she meets Merlin, who has aged backward over the centuries into a teenager, and together they must break the curse that keeps Arthur coming back. Their quest? Defeat the cruel, oppressive government and bring peace and equality to all humankind.

A queer Arthur retelling in space – what is not to love about the concept itself! And it is not just the concept, but the execution of it as well – Once and Future takes Arthurian legends and the ideals of that time, the current political scenario, and applies it to a future where capitalism is the first and last word to rule the planets. Ari comes from Ketch, a planet that has been sealed away from the rest of the human-inhabited universe, by a company called Mercer that leverages its supply chain to practically rule all the various inhabited planets; she was rescued by Kay’s parents and adopted by them, when Ketch was sealed off. Now, Ari and Kay, who have been on the run by themselves for the last three years, hide away for a bit on the empty-but-preserved-for-heritage Earth, thus leading to Ari pulling out Excalibur and starting the 42nd cycle. Merlin, who has been aging backwards, wakes up as a teenager, and sets out to find the latest Arthur, train him and complete his mission to unite humanity, but is surprised to find a teen girl instead of a pre-teen boy; nevertheless he still has to complete the cycle and off they go on their adventures, but the things Merlin wants to avoid for this ‘Arthur’ keep falling in their way anyway.

As I said before, the strength of this story lies in how well it applies the ideals and tropes of the legends to this futuristic story. Ari pulls out the sword from a fallen Earth, and the evil to be defeated is unchecked capitalism and the monopoly of a company. Guinevere is already a queen when Ari returns to her (they used to have a thing when younger), and the throne is of the planet of Lionel, a tourist place that has a Dark Ages theme, complete with knights, jousts, etc., though with modern tech, of course. Their friends are versions of the knights of the round table, but who is who is an interesting puzzle for some. Ari and Gwen do have some issues among them, but it is more about the baggage of their past, than the drama of the infidelity variety. The camaraderie between them all is in place because of shared childhoods, and Merlin, the immortal is an interesting addition to them. Along with the lighter moments, though, the story does take us to dark places, as Ari is tested yet again and again in her quest to keep her family safe and to defeat Mercer.

In contrast with Ari, a young king, yet untrained in politics and strategy, and who is caught between Merlin’s and Morgana’s plans for her, Merlin has the weight of the entire past to shed, to start living for something other than raising Arthur. He has a lot of regrets in his past, right from the first Arthur who he couldn’t save, the antagonistic relationship with Morgana, his shame over all the Arthurs after that he couldn’t save, and he also has fears over the future, over how this might be the last cycle in which he can help Arthur properly, his reluctance for relationships due to his nature and his duties. But oh, I do have to mention, I love his sass, and him getting flustered over Val flirting with him.

The ending was stretched out a bit after the climactic scene, which I felt undercut the tension of the ending a bit, and also sort of rushed in new elements to carry into the sequel. I particularly am skeptical over the vague plan to take down this new enemy, but I guess I will have to see what the sequel brings.

One thought on “Review: Once & Future by Amy Rose Capetta & Cori McCarthy”