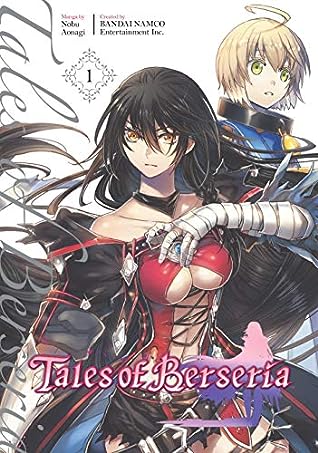 Velvet Crowe is out for revenge.

Her brother was murdered. She was turned into a Daemon. Both in one night, and both at the hands of her brother-in-law, Artorius. And after spending three excruciating years in prison while he enjoyed a meteoric rise to fame as the Shepherd, hero of the people, she’s prepared to do whatever it takes to stop him, dead.

With gorgeous illustrations by Nobu Aonagi that are sure to please any Tales fan, this prequel to Tales of Zestiria is an epic adventure-fantasy where the good guys can be bad, and a bad girl can save the world.

I LOVE Tales of Berseria – it’s one of my favorite JRPG titles and my favorite in the Tales of Series franchise for a good reason. It had an amazing story, memorable and timeless characters, engaging battles and interesting mechanics and the music… man, that music, I can’t forget that! Now adapting something onto the platform of a comic book isn’t a new invention but sometimes you can’t capture the magic of the original in the pages of a comic book. Tales of Berseria Manga falls into that category. I am not blaming Nobu Aonagi, nor his faithful style to the game designs, but more to how such a complex story can be portrayed in such media that honestly should had work. The pacing, in my perspective, is a problem, everything going way too fast that you don’t have time to fully embrace and feel for Velvet’s tragedy and why she’s set on getting her rightful revenge. Characters themselvesm aside from Magilou, who stays true to her characterization from the game, all act like a carbon copy and don’t feel like who they are supposed to be in this story. Heck, even Velvet feels more of a vanilla light version of herself, even though she’s one of the most complex video game characters out there, to this date.

If you want a proper take on the story then this manga, do yourself a favor and play the video game itself. It is a fun game, full of strong emotions, a lovable cast of villains as your heroes, thrilling battles and is a good way to pass the time. Or you could read this, which isn’t bad for a brief short read, really. It has good art and it’s doing a fine job as an abridged version of the story so yeah, you decide.