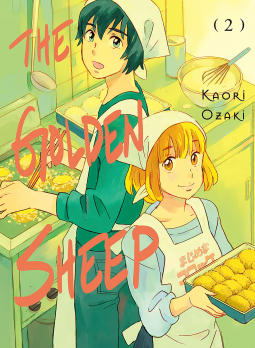 After rumors start to spread at school that Tsugu and Sora have run off together to Tokyo, Asari tries to get closer to Yuushin. Yuushin, having lost his living punching bag, is left with aimless aggression, until he asks his coach to let him take the pro boxing test. In Tokyo, the old friends collide and painful truths are laid bare…

When Tsugu and Sora reach the house where her father sent them too, they find a grumpy old man who declares Sora his estranged son, and ropes them into being employees in his croquette shop. Finding a home, and something to do makes them both happier than they were back in their town, and so, when the parentals tell them to come back, they decide to stay on in Tokyo. For Sora, particularly, he is recovering from his bullying and the depression from it, and he also finds this new life more fulfilling; he is also starting to fall for Tsugu, and they both do go on a cute non-date later on in the volume. Am I rooting for them? Sure! I also love the found family dynamics of Tsugu, Sora and the grandpa – while the latter orders them about like a boss, he cares for them like his kids, so its sweet.

Meanwhile, Asari is surprised that Tsugu ran away with Sora instead of Yuushin, and she tries to get close to the latter. Yuushin, still hurting and deprived of his favorite punching bag, tries to bully Asari, too, and finally he decides to just go pro in boxing to get out of this town. After months of training, his test is being held in Tokyo, and coincidentally he finds the croquette shop where Sora is now working, and goes to confront him. I will be honest – I haven’t warmed up to Yuushin at all, because he just hurts the world when he is hurting. Sure, he is a teen, but he almost drove Sora to suicide, so yeah, Sora doesn’t have to forgive him, and Tsugu involving Sora in helping Yuushin kind of didn’t sit right with me, especially since she has the context. Whether Yuushin is capable of not being a bully going forward, and atoning for the pain he caused, remains to be seen.