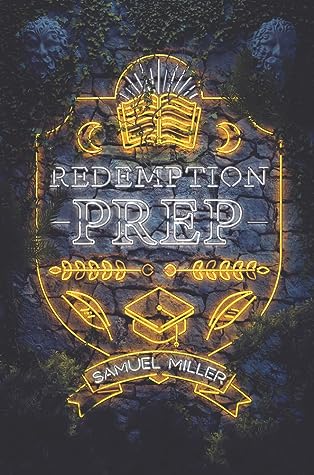 Redemption Prep by Samuel Miller
My rating: 3 of 5 stars

Twin Peaks  meets Riverdale in this twisty atmospheric mystery from the critically acclaimed author of A Lite Too Bright, Samuel Miller, about the search for a missing girl at an elite prep school.

Everyone knows Emma. Neesha’s her best friend, Aiden’s her basketball star boyfriend, and Evan’s her shadow, following Emma’s every move.

Emma stands out, which is hard to do at Redemption Prep, a school where every student has been handpicked to attend its remote campus in the forest of Utah. So when she goes missing in plain sight during mass, everyone notices.

And everyone becomes a suspect, especially at a school with so many rules: Don’t skip mass. Don’t break curfew. Don’t go into the woods.

Emma’s disappearance ignites an investigation, and Neesha, Aiden, and Evan all want to find her—for different reasons. But they each have their own secrets to hide, and not everyone wants Emma to be found.

As the search continues, the students start to realize that they’re not the only ones trying to hide something. Redemption Prep has secrets, too—secrets bigger than any of the students could have imagined, and Emma could be the key to finding out the truth . . . if anyone can find her.

When I started this book, I was excited, because mystery in a boarding school is one of my favorite settings. And Redemption Prep does fulfil on some aspects of the setting and its tropes – the school is quite isolated, so it has that creep factor; the student body is hyper-competitive and you don’t know who is trustworthy; there is definitely something shady going on with the school’s origins as well as its teachers. However, the thing with the book was that I was having a good enough time with the plot for the most part, but when the reveals started, I was like ‘no what are you doing with that trope, put it down’ and the coup de grace was the ending which ends on sort of a cliffhanger and just cuts you off and you are left wondering if this was supposed to be a series, because it is utterly unsatisfying as a standalone.

The plot centers around a popular student, Emma, who goes missing, and three people are mainly looking for her, aside from the school administration – her boyfriend Aiden, her friend/roommate Neesha, and her stalker Evan, with each getting their own PoV, and Emma’s perspective coming through her diary entries. The school’s response to her going missing is weird, and it unearths some extreme things the school does, like hire a ton of security who are called ‘maintenance workers’, frequent invasion of student privacy (which is the least of it, tbh) and their over-involvement in student success. Aiden is probably the most boring PoV, because I honestly couldn’t care about him; Evan’s is questionable because he was stalking her for months to the point where he could accurately predict her patterns; Neesha’s is interesting because she is stuck between what she knows and what she is being told regarding Emma’s disappearance.

Add in the fact that Neesha and Emma were selling drugs (which was also a way to conduct human trials for Neesha’s invention of adderall) makes it even more sordid, because well the suspect pool extends. However, there are many things brought up in the plot that don’t always pan out. Her invented drug does tie into the plot, but I was so underwhelmed by the reveals that it didn’t even feel momentous. Evan’s perspective gives us most of the exposition for the book, and I am guessing his pattern thing and rules for communication may be suggesting he is autistic. Anyway, his drive for finding Emma stems from his own mother’s death, and yet, it is also addressed that it does not make his stalking right. The school’s teachers are a bit stock scientist trope so I was disappointed there, too. And the final reveal about the school’s origin was definitely fulfiling the Twin Peaks comparison, though I don’t see anywhere how the plot relates to Riverdale.

Finally, all I can say is that while it is atmospheric and an interesting read for the most part, the mystery and the ending are underwhelming.

Is it diverse? Indian girl protagonist; character with depression

One thought on “ARC Review: Redemption Prep by Samuel Miller”