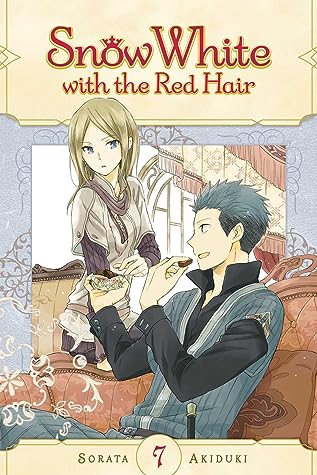 Snow White with the Red Hair, Vol. 7 by Sorata Akiduki
My rating: 4 of 5 stars

This volume closes the pirate arc, and gives us a bit more about Shirayuki’s family, and after that there are smaller stories playing out back in Wistalia. Zen and Shirayuki have already committed to each other, but they are taking things slow. During a open day at the palace, Shirayuki sees Zen in his regalia and feels a bit of a distance from him, but they do talk it out later on. Their romance is getting more fluffy by the chapter and I am so here for it! Her hair lands her in minor trouble yet again, when a traveling troupe, perfoming at the palace, rope her in as a replacement for the actress who injured herself. Zen magnificently saves the day and saves her hair from exposure. But there are also good things coming for Shirayuki as she gets promoted from an apprentice to a full herbalist, and gets another bump in her status thanks to Raj. Izana is a bit snarky about it, but maybe it is more to tease Zen – who knows what is going on in his mind. I like the slight antagonistic nature of his character, without it being too much drama and angst between him and Zen; it fits in with the light vibe of the story overall. Oh, and the most entertaining part of this volume was an incident where Mitsuhide gets a whiff of some hallucinogenic drug, that makes him act like all fancy and speak in flourishes, leading to everyone, especially Zen and Kiki (though I screamed at him acting all charming with her) to frustration!

One thought on “ARC Review: Snow White with the Red Hair, Vol. 7 by Sorata Akiduki”