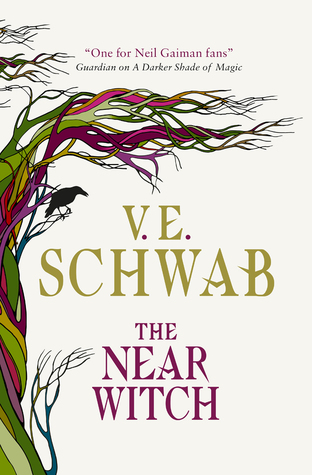 The Near Witch by Victoria Schwab
My rating: 4 of 5 stars

The Near Witch is only an old story told to frighten children.

If the wind calls at night, you must not listen. The wind is lonely, and always looking for company.

There are no strangers in the town of Near.

These are the truths that Lexi has heard all her life.

But when an actual stranger, a boy who seems to fade like smoke, appears outside her home on the moor at night, she knows that at least one of these sayings is no longer true.

The next night, the children of Near start disappearing from their beds, and the mysterious boy falls under suspicion.

As the hunt for the children intensifies, so does Lexi’s need to know about the witch that just might be more than a bedtime story, about the wind that seems to speak through the walls at night, and about the history of this nameless boy.

Part fairy tale, part love story, Victoria Schwab’s debut novel is entirely original yet achingly familiar: a song you heard long ago, a whisper carried by the wind, and a dream you won’t soon forget.

The best way to describe this would be Pied Piper with a generous helping of spooky. In the village of Near, there is a legend of the Near Witch who lived a century ago who was so attuned to the elements, she could manipulate them at will. And the town, obviously punished her for her witchcraft. Now, children are disappearing every night, and coincidentally, a young stranger, Cole has come to town. Lexi is probably one of the few people who doesn’t think he is responsible, but with patriarchy and a strict uncle, she has no way of getting her voice heard. Still, she tries to seek the help of the two remaining witch sisters, who have offered shelter to Cole, and nightly, she goes searching for clues as to where the children have been taken to.

The writing creates an eerie spooky atmosphere, with moors, and forests that seem alive, and the wind that feels like a tangible and living thing. The characters themselves, are sort of a mix – there are some like Lexi and her mother and uncle who are given complexity, but most of the rest, including Cole, seem undefined for the most part. The pace is a bit slow, with most of the novel being about Lexi just walking all over, and occasionally talking to Cole (the romance isn’t super developed, but you have to love Schwab’s cinnamon roll boy characters) and a lot of wind at night. The ending also leaves it sort of open to more, which I don’t mind – it concludes well, and still has potential for a sequel.