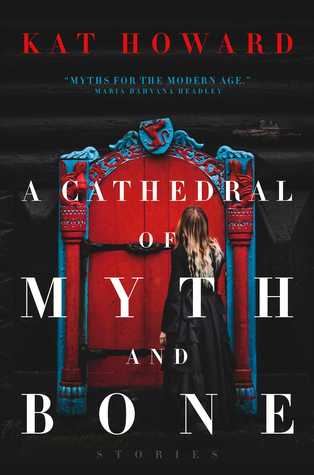 A Cathedral of Myth and Bone: Stories by Kat Howard
My rating: 5 of 5 stars

In these sixteen exquisite stories Kat Howard deftly weaves in and out of the countries of myth and hagiography to write the lives of women untold and unexplored.

A woman being written into her boyfriend’s fiction is at first flattered to be his muse, but then finds her real life literally consumed and overtaken by his. A desperate young woman makes a prayer to the Saint of Sidewalks, but the miracle she receives isn’t what she expected. A painter spies a naked man, crouched by the Cathedral of St. John the Divine, transform into a beautiful white bird and decides to paint him, and becomes involved in his curse. Jeanne, a duelist and a sacred blade for God and Her holy saints, finds that the price of truth is always blood. And in the novella “Once, Future” Howard reimagines the Arthurian romance on a modern college campus as a story that is told, and told again, until the ending is right.

A Cathedral of Myth and Bone has a fantastic collection of Howard’s short stories, many of which are retellings of legends, myths and fairytales, and others being urban fantasies. Right from the first story, A Life in Fictions, where the protagonist is being pulled into her ex-boyfriend’s writing to live out the life as the main character of his stories, I was hooked. One of my favorite retellings was, of course, Once and Future in which the Arthurian legends are being played out in modern times, when a lit class participates in an assignment where they pretend to be the characters, and soon they are actually ‘becoming’ them. Many of the stories are about women taking charge of their own fate, and some others are about saints and martyrdom. Thematically, this entire anthology is atmospheric in the way it includes magic or wonder in everyday life, with dark overtones or undertones to it. Honestly, every story is engaging and pulls you right in, and recommend this book wholeheartedly!

One thought on “Review: A Cathedral of Myth and Bone: Stories by Kat Howard”