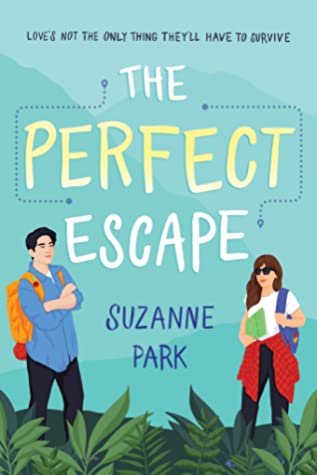 The Perfect Escape by Suzanne Park
My rating: 3 of 5 stars

Nate Jae-Woo Kim wants to be rich. When one of his classmates offers Nate a ridiculous amount of money to commit grade fraud, he knows that taking the windfall would help support his prideful Korean family, but is compromising his integrity worth it?

Luck comes in the form of Kate Anderson, Nate’s colleague at the zombie-themed escape room where he works. She approaches Nate with a plan: a local tech company is hosting a weekend-long survivalist competition with a huge cash prize. It could solve all of Nate’s problems, and Kate needs the money too.

If the two of them team up, Nate has a true shot at winning the grand prize. But the real challenge? Making through the weekend with his heart intact…

The Perfect Escape has the lives of two teens, both of whom need money to solve problems in their life, intersect when they both work at a zombie-themed escape room. Nate, who likes puzzles and zombies, and has his life planned out to be an entrepreneur, and Kate, who loves drama and theater, and wants to escape her strict home life, meet and have a crush on the other, but they don’t really act on it thinking the other one won’t be interested. Kate invites him to join her as a partner for a survival competition, as the prize would let her finally find a way to New York, away from her father.

For a contemporary romance, there isn’t actually that much romance in the book. Sure, they find each other attractive, but Kate doesn’t intend to stick around, so she isn’t taking initiative, and he thinks she is out of his league, so he isn’t doing it either. They have strong individual character arcs, though, and work better as friends, in my opinion, as that is what their relationship is, outwardly, for most of the book. The first half of the book lets us know about them, their struggles, the reasons for them wanting to participate, and how similar and different they are. Nate is a driven and ambitious person, much like Kate’s father who doesn’t see her theater dreams as important and pressures her to join business school; meanwhile, he also has curtailed most of her freedoms, and is basically a tyrant father, so she is pretty much the opposite of him when it comes to money. This approach to ‘success’ is contrasted between her and Nate very well.

The second half is about the competition itself and here’s where things get intense. It has a Hunger Games like vibe, with them staying away from other competitors because interactions can get a bit violent. Then there’s also a set of players who are out for them, and well, without giving spoilers, it takes a hard left into ‘WTF is happening’. Nate’s enemies go to extreme measures, and things get dicey between the two of them as the competition heads to a close. I felt the ending was a bit rushed, and glossed over Kate’s relationship with her dad, and considering this book might have a sequel, I don’t understand the reason for doing so. The pace of the book is also a bit all over the place, and chapter transitions feel abrupt. The writing also could have been made better, and the dialogues with less cringe.

In short, I like the characters and their stories, but the writing wasn’t good and reading it felt like a chore at times.

Is it diverse? one of the main character is Korean-American (OwnVoices)