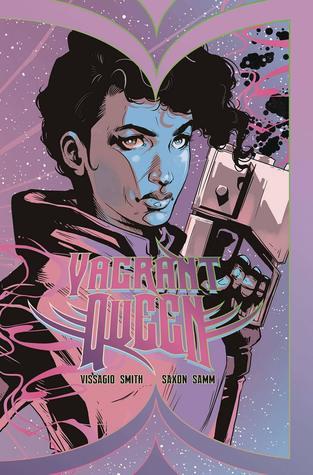 Vagrant Queen Vol. 1 by Magdalene Visaggio
My rating: 2.5 of 5 stars

Former child queen Elida was driven from her throne at age ten and forced to wander the galaxy, evading the revolutionary forces that wanted her dead. When an old frenemy claims to know the whereabouts of Elida’s long-lost mother, she is forced to return to her former kingdom and stage a rescue.

I’ll admit going into this I thought it was a story about a queen reclaiming a kingdom, but Elida’s story is about having nothing to do with her throne. When she was ten, revolutionaries had stormed and ended the long line of monarchy, and she, the child queen, and her mother had been in hiding, until as a teen, she is separated from her mother, too. Since then, she has been surviving on the edges of the system, flying under the radar; she is still, however, a target for the leaders of the revolution, one of which has a specific desire to see her apprehended. And an old acquaintance, Isaac, coming with news of how to reach her mother seems too good to be true, but she has to try.

The premise of the story is quite interesting, and I see why they would pick it up for a TV adaptation – it certainly has potential as SFF story: there’s a republic that’s barely existed for a decade and a half, on the heels of a thousand-generation long monarchy, and the lost queen is more or less forgotten. But the search for Elida is about something much more ancient that her royal line holds, and it’s a mix of fantastical elements in this futuristic space kingdom that doesn’t really believe that there ever was an Earth they emigrated from. Speaking of the Earth thing, though, that’s where I got a bit confused – because Isaac seems to be from Earth, so it figures that he knew the path from there and with the universal GPS, you’d think the path back wouldn’t be lost?

The artwork didn’t impress me – the proportions were off or weird in so many panels, and the storyboards aren’t helping either with its jagged flow. It brings up backstories one after another in a series, and confuses the reader. The coloring wasn’t pleasing either. Overall, the artwork is where this book suffers and despite it’s decent plot, it wasn’t as fun to read due to it.

Is it diverse? Black main character

Received an advance reader copy in exchange for a fair review from Vault Comics, via Edelweiss.