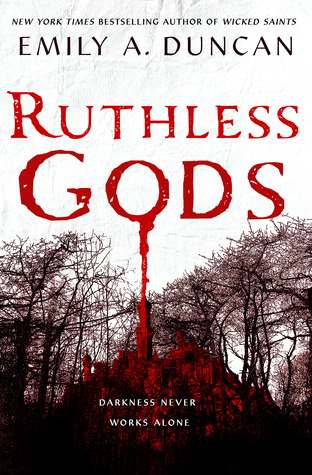 Ruthless Gods by Emily A. Duncan
My rating: 5 of 5 stars

Nadya doesn’t trust her magic anymore. Serefin is fighting off a voice in his head that doesn’t belong to him. Malachiasz is at war with who–and what–he’s become.

As their group is continually torn apart, the girl, the prince, and the monster find their fates irrevocably intertwined. They’re pieces on a board, being orchestrated by someone… or something. The voices that Serefin hears in the darkness, the ones that Nadya believes are her gods, the ones that Malachiasz is desperate to meet—those voices want a stake in the world, and they refuse to stay quiet any longer.

In her dramatic follow-up to Wicked Saints, the first book in her Something Dark and Holy trilogy, Emily A. Duncan paints a Gothic, icy world where shadows whisper, and no one is who they seem, with a shocking ending that will leave you breathless.

Warnings: blood use in magic, self harm and mutilation; body horror; loss of autonomy

Look, this book broke me a bit, so my review might be a little, um, incoherent. I mean, I could have waited until I recovered, but I like having my reviews come fresh especially when the book in question has affected me so. So to start with, I was a little fuzzy on the exact series of events in the ending of Wicked Saints (I blame the narrators of the audiobook), so when I started Ruthless Gods, I still had to remember and pick up the clues of what happened (I didn’t have WS with me, so I would have to make do) and even so, this book does a good job of reminding you, so kudos for that. So, at the start, it has been months since that ending; Malachiasz is an eldritch being who almost became a god but is now in a state of constant flux; Serefin is a king who is in a court that doesn’t want him, and he is also fielding suspicion of having killed his father (when it was the opposite); Nadya is kinda confined to his palace as she was the actual killer and he doesn’t want to out her; she is also been cut off from the gods, and Velyos, who she freed, has picked Serefin as his ‘agent’.

For the three main characters, their paths are in direct conflict with each other – Serefin has to punish Malachiasz for treason, despite their familial connection; Nadya wants to reconnect with her gods, but the path to that means putting Malachiasz’s life on the line; Malachiasz still is very intent on killing the Kalyazi gods. With their opposing motives, the fact that they are sort of together on this journey to a realm where mortals cannot survive means that there is a general air of distrust among them. Moreover, Nadya can’t decide between her devotion to her gods, who have hidden things from her, and her love for Malachiasz, which is forbidden since he is a ‘heretic’ monster who played her in WS, and she can’t exactly trust his motives this time either, and she is still wondering what is the source of the magic that burns on her palm, and what is the source of divinity. Meanwhile, Velyos is out to free other fallen gods, and an even older one, and both Tranavia and Kalyazin are in danger from the current pantheon as well as these gods who were locked away.

If divinity was a thing of monstrosity, truly, then what did it all make her?

The best part about the book is the morally ambiguous cast of characters and the relationships between them. I liked Serefin in the previous book, and I loved him so much in this one, too – I am a little angry at Duncan for subjecting him to so much pain. Like, this boy needs a nap for a century and a half, after all the things he has been through. His entire mood in the book is depressed and tired. I loved Nadya’s questioning of her faith, about the source of magic, about her conflicted feelings for Malachiasz, which she had in the previous book, too, yes, but in this one, it is of a different flavor. The events from the previous book, the silence from the gods in this one, and her own insecurities, all make for a interesting blend of circumstances for her character. She is forced to reckon with newer and newer truths and betrayals. And Malachiasz, while he doesn’t get main PoV, still has a few chapter from his viewpoint in the interludes (along with other secondary characters like Parijahan, Katya, Kacsper, who also have minor subplots of their own) and he is such a delightful set of contradictions in one character! I was also surprised with how much Duncan convinced me to join in cheering for this ship – Malachiasz and Nadya are so angsty, dark and hit that perfect note of what it is like to be enemies and lovers at the same time; also, damn, their scenes together had my heart clenching, so *slow claps it out*.

Did you expect to return and find everything exactly like it was before you burned it to the ground? There are only ever ashes after a fire, Malachiasz, and I’ll have you at my feet yet.

Look, despite it taking me 5 days to finish the book, trust that it only took that long because I couldn’t find the time to read it. If I could, I would have read this book straight in one sitting; it just had that power to pull me in. It is much more darker than WS, and quite cruel in toying with your feelings, and really quite bleak in tone, occasionally lifted by the quippy interactions between the characters, but on the whole, it still is quite entertaining as a read!

Received an advance reader copy in exchange for a fair review from Wednesday Books, via Edelweiss.

Previous book in the Something Dark and Holy series

2 thoughts on “ARC Review: Ruthless Gods by Emily A. Duncan”