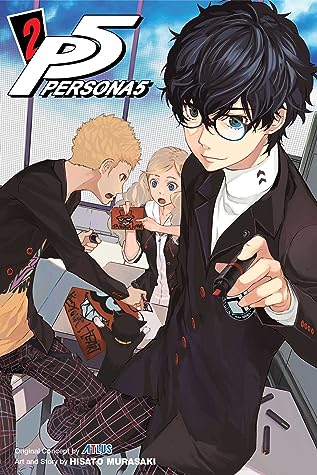 Based on the popular video game, this manga’s phantom thieves will steal your heart!

After being arrested and having to transfer to a new high school in Tokyo, Akira Kurusu is given the goal of rehabilitation and awakened to a new power—the power of one’s true self, a Persona. Using his Persona and the mysterious navigation app Momentos, Akira and his friends take on the role of phantom thieves, saving people from the twisted desires of those around them.

This volume concludes the Kamoshida arc – where, with the help of another classmate whose Persona awakens, Ann, Akira and Ryuji are able to defeat him in his castle, steal his treasure, and get him to confess to his crimes. During their mission, they used a secret group name to bait him publicly, which makes them famous in their school’s circles, and after Kamoshida is defeated, requests pour in through an anonymous website to help them too. The four of them decide that they want to bring down other adults, too, whose egos have grown into palaces and who torment other people. But, to start with as a group, they go after one of the requests, about a stalker, and uncover another place in the ‘other’ world they go to in their personas, a communal palace; through that person, they come across a bigger target, a famous artist who is torturing his students.

I loved the addition of Ann to this story, because it gave more dimension to the story of the victim (who was Ann’s friend) whose death started Akira’s journey as a Persona. Also, Ann being a biracial girl, has her own character arc to break out of her meekness. The three of them make a good team, and I’m also amused at the cat deferring to Ann like a princess. Opening up the world with the communal space in that world, and the mystery introduced there was a good plot point for the storyline, as it hints at a larger central storyline that is being kept aside for now, while they tackle individual ‘monsters’, as it were. Looking forward to how they bring down another abuser!

Previous book in the Persona 5 series