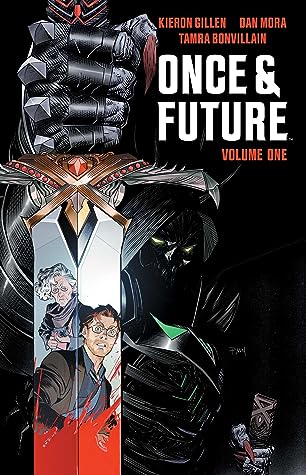 When a group of Nationalists use an ancient artifact to bring a villain from Arthurian myth back from the dead to gain power, retired monster hunter Bridgette McGuire pulls her unsuspecting grandson Duncan, a museum curator, into a world of magic and mysticism to combat the deadly secrets of England’s past that threaten its very future.

When a group of Nationalists use an ancient artifact to bring a villain from Arthurian myth back from the dead, retired monster hunter Bridgette McGuire pulls her unsuspecting grandson Duncan, a museum curator, into a world of magic and mysticism to defeat a legendary threat. Now the two must navigate the complicated history of the McGuire family, all while combating the deadly secrets of England’s past that threaten its very future.

New York Times bestselling writer Kieron Gillen (The Wicked + The Divine, Star Wars) and Russ Manning Award-winning artist Dan Mora (Buffy The Vampire Slayer, Klaus) explore the mysteries of the past, the complicated truths of our history and the power of family to save the day…especially if that family has secret bunkers of ancient weapons and decades of experience hunting the greatest monsters in Britain’s history!

Note: Not YA, but suitable crossover material

This story about a regular guy pulled into his grandmother’s attempts to stop the waking of King Arthur was a wild ride of an adventure. Duncan’s grandmother, Bridgette is a retired monster hunter, something he DID NOT KNOW until she escapes from her retirement home one night and asks him (at gunpoint) to help out. Duncan has to participate in a quest to stop the waking of King Arthur, whose scabbard had been found at an archeological dig, and thus can be used to heal his body and wake him. Bridgette is skeptical of the prophecy that Arthur would wake in the hour of Britain’s greatest need (or whatever the wording is) because she correctly assumes it could be taken in two different ways. In fact, as Duncan gets deeper into the mission, involving a recent date in the quest, and getting more and more into the ‘other side’, he realizes his family history is way more complicated than he had been led to believe, and his grandmother has had a plan decades in the making.

Once & Future directly throws us into the action, without much exposition, but if you are familiar with the Arthurian legends, and how there have been many of them, it is pretty fast to get into. The story plays with the various versions of the legends, and the way they have changed over time to establish some method to the magic that holds Arthur, and also the other characters. Also the way the storyboard is constructed makes for an engaging and entertaining tale. Also, the expressions of the characters, OMG! I loved the relationship and rapport between the characters, and how they are rendered (in characterization) in the story. The artwork is also pretty good, and I loved how gruesome Arthur looks, and the coloring style of the comic. There was only one thing I was having trouble accepting is that, for a museum curator, Duncan doesn’t know much about Arthurian legends, even in passing?

Received an advance reader copy in exchange for a fair review from BOOM! Studios, via Netgalley.

One thought on “ARC Review: Once & Future, Vol. 1 by Kieron Gillen & Dan Mora”