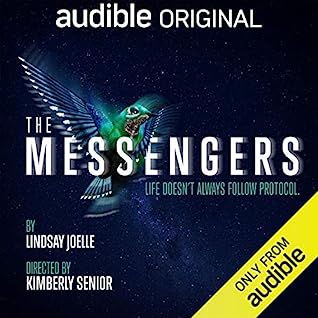 The Messengers By Lindsay Joelle
My Rating: 3/5

In the midst of a decades-long intergalactic war, a soldier and a messenger discover that they share more than a mission…while a runner and a refugee find an unexpected path to freedom that will link their lives forever. Performed with wit, warmth, and humor, The Messengers is an engrossing dark comedy about survival, connection, and the secrets that hold us together.

Audible originals are nice, they provide so many cool audio dramas and being a member I get to enjoy them. Some are good, some are bad and then there’s the rare occasion of a story that has a really big potential to be incredible and it get scrutinize. This is one of those occasions it happens and it’s not because of the incredible performances by the actors or the script it’s because of how short it is. A one hour drama isn’t bad by all means, it’s exactly like a length of a prime time tv show airing for you to enjoy. You’d either enjoy the episode or find it weak but for me I am a bit meh about it. It could had been so good for many reasons.

The story is set in the future where there’s an intergalactic war going on, and people are dying, in pain, or worse. Discrimination is everywhere, madness seeping into the soldiers, and a plague is on the loose, destroying lives. Our story focuses on two pairs, one being two federation soldiers on a mission with a mysterious package, and the other a soldier and his refugee assisting him with letters translations. It is a basic sci-fi premise and yet it was really engaging with the assistance of audible originals amazing soundtrack production and talented actors, Kaliswa Brewster, Ana Reeder, Zoë Winters and Alex Weisman. However it does not save it from its pacing problem regardless of how much I liked the characters few more than others.

I don’t know what to tell you – should you give it a shot? Why, yes it’s only a one hour book; what’s there to lose. Is it worth purchasing? Not really, I would wait until it’s on sale. There’s other better audible originals out there like Interview with A Robot, The Mystwick School of Musicraft, The Bridge Kingdom or Alien: Out of the Shadows. Go check them out instead.