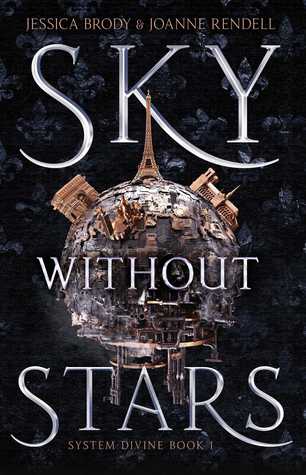 Sky Without Stars by Jessica Brody
My rating: 3.5 of 5 stars

A thief.
An officer.
A guardian.

When the Last Days came, the planet of Laterre promised hope. A new life for a wealthy French family and their descendants. But five hundred years later, it’s now a place where an extravagant elite class reigns supreme; where the clouds hide the stars and the poor starve in the streets; where a rebel group, long thought dead, is resurfacing.

Chatine is a street-savvy thief who will do anything to escape the brutal Regime, including spy on Marcellus, the grandson of the most powerful man on the planet.

Marcellus is an officer—and the son of an infamous traitor. In training to take command of the military, Marcellus begins to doubt the government he’s vowed to serve when his father dies and leaves behind a cryptic message that only one person can read: a girl named Alouette.

Alouette is living in an underground refuge, where she guards and protects the last surviving library on the planet. But a shocking murder will bring Alouette to the surface for the first time in twelve years…and plunge Laterre into chaos.

All three have a role to play in a dangerous game of revolution—and together they will shape the future of a planet.

I guess I should start this review by mentioning I am not familiar with the story of Les Miserables, so I’m just commenting on this story on its own, rather than as a retelling. It is set in space, far into the future, where humanity has settled into a planetary system with three suns and established a new civilization called System Divine. The rainy, sunless colony on planet Laterre was formed by a wealthy French family and now generations later, it is ruled by the aristrocrats who make up the First Estate, and is governed by the Second Estate that is the military and police forces, while the working class that makes up the Third Estate mostly lives in poverty.

Chatine, whose parents are con artists, and criminals, made her childhood such that she is cynical, scrappy and has street smarts, and most importantly she wants out of Laterre. She cross-dresses as a boy to avoid trouble, and when she meets Marcellus, he assumes her to be one, and asks her help as an informant. Marcellus is the grandson of the military general, and is possibly in line to take up the position, and from childhood he has hidden the truth that his father was one of the revolutionaries that was imprisoned on the prison planet of Bastille. Aloutte is a young novice in a sisterhood that lives hidden in the city, that has been keeping the knowledge from Earth (as in books and such) protected from the System Divine which has deliberately erased history to keep the masses ignorant. In fact, writing and reading itself is abolished, with most information interpreted in visual or audio formats. Marcellus finds a written clue from his dead father that he can’t read, and here’s where he will start digging into the revolutionaries. His grandfather, suspicious of him, hires Chatine to spy on him.

Now, the story is complex, with a lot of reveals and stuff, so I won’t go into that. Instead, I want to talk about the world-building – for a grim futuristic dystopia, it sets the right tone, and you can see how a story set in 19th century France can fit even in a science-fiction setting. The themes of oppression of the masses via distraction, the deliberate measures to keep them uneducated and thus uninformed, the brutality of the Second Estate and the extravagance of the First Estate are brought out very well. I must say, though, that the book is unnecessarily long, considering not a lot of events happen in the plot to justify that length. The personal hurts that Chatine suffers, the lies her parents tell her, the grief she has been holding onto for years, as well as the anger against a certain other character are also done quite well as a subplot. But the character of Chatine herself comes across as irritating at times, because she makes snap decisions, at the cost of creating more trouble. And the relationships between the three of them, or should I say, the love triangle, was really trying my patience with how it felt shoved into the plot. Marcellus literally goes the Disney prince route by falling in love at first sight, with Aloutte.

Finally, this book has an interesting storyline, and good world-building, but the characters have a long way to go to endear themselves to me.

Is it diverse? one of the main characters is a black girl