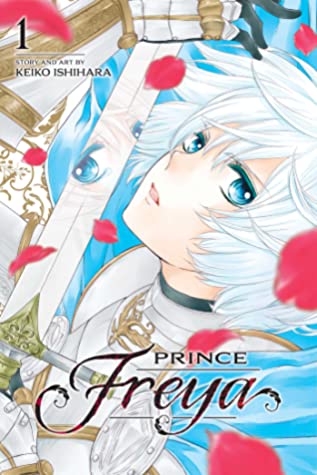 Prince Freya by Keiko Ishihara
My rating: 3 of 5 stars

To save her kingdom, a simple village girl must live a royal lie.

The powerful kingdom of Sigurd has slowly been conquering all the lands that share its borders, and now it has turned its voracious attention to the small, resource-rich Tyr. Tyr cannot hope to match Sigurd in strength, so in order to survive, it must rely on the intelligence, skill and cunning of its prince and his loyal knights. But should their prince fall, so too shall Tyr…

Freya thinks of herself as a simple village girl, but her idyllic life is shattered when she is caught up in the aftermath of a treacherous Sigurdian plot. She bears a striking resemblance to her country’s beloved Prince Edvard, who lays dying from poison. Without its ruler, all of Tyr will quickly be engulfed by Sigurdian violence. Now Freya must take Prince Edvard’s place and lead his valiant knights in defending the realm!

A story about a peasant girl who has to impersonate a prince, Prince Freya brings a plot filled with political intrigue. Freya lives with her sickly mother and the two brothers her mother adopted have grown up to be soldiers in the prince’s army. She’s a typical peasant girl, no warrior skills to speak of, I mean, and so when she asked to take the place of the dying prince, things would be difficult since aside from their similarity in appearance, they have nothing else in common. She manages enough to convince most people, and aside from the close aides to the prince, no one knows. I wished the story told us how she was able to be convincing enough, by the way, since she wasn’t exactly close to the prince herself, and he is a character completely opposite in personality to her. Of the various men in her orbit, many are possible love interests for her, including the adoptive brothers (which is a trope I hate!) and well there are a lot of cliches aside from that. For now, it is a generic fantasy plot, but the mystery of the prince and the political plot are still of interest to me. As for Freya, herself, well, she isn’t exactly a strong fierce protagonist type, but it is natural to have a timid peasant girl take her time to grow into the role, as long as the growth is shown.