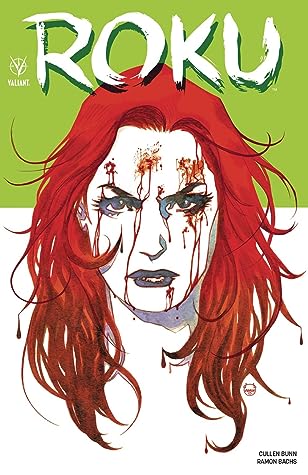 Roku by Cullen Bunn
My rating: 2 of 5 stars

In order to save a life, she’ll have to kill a lot of people.

Once she was MI-6 agent Angelina Alcott, but Angelina died and all that’s left is Roku. Honed to razor edge lethality, and enhanced with dark arts and looks that kill, she’s become the ultimate underworld assassin. But now, the deadliest woman on the planet is about to be confronted with a target even she can’t bring herself to kill…

Killer assassin with some killer hair sent on a mission to get an asset for her anonymous employers but instead decides to protect the girl she has been sent to retrieve, is a nice concept, but unfortunately that’s the extent of this graphic novel. It felt mostly a collection of cliches – enhanced assassins, killer with a heart, a person from the past, a powerful child to protect, other powered assassins coming after and our main character having to fight them – and it doesn’t do anything with the character herself. Roku’s characterization is so minimal you don’t even know why she hesitates to complete her mission – obvious, yes, as it is a child, but not for a top cold-blooded assassin who supposedly doesn’t have any memories. Value for human life isn’t exactly one of her strong points when the story starts with her causing a shootout in a club just to get her target. The character who recognizes her from the past also doesn’t fill in much details, and the other assassins who come after her also lack much personality. The fight scenes were meh, and the telekinetic hair may have been the only exciting thing about it. The ending wrapped up the mission storyline well enough, though, so I guess it has that going for it.

Received an advance reader copy in exchange for a fair review from Valiant Entertainment, via Edelweiss.