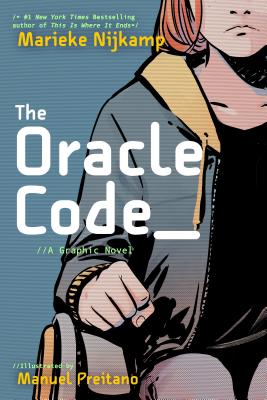 The Oracle Code by Marieke Nijkamp
My rating: 4 of 5 stars

After a gunshot leaves her paralyzed, Barbara Gordon enters the Arkham Center for Independence, where Gotham’s teens undergo physical and mental rehabilitation. Now using a wheelchair, Barbara must adapt to a new normal, but she cannot shake the feeling that something is dangerously amiss. Within these walls, strange sounds escape at night; patients go missing; and Barbara begins to put together pieces of what she believes to be a larger puzzle.

But is this suspicion simply a result of her trauma? Fellow patients try to connect with Barbara, but she pushes them away, and she’d rather spend time with ghost stories than participate in her daily exercises. Even Barbara’s own judgment is in question.

In The Oracle Code, universal truths cannot be escaped, and Barbara Gordon must battle the phantoms of her past before they swarm her future.

The Oracle Code is the story of Barbara Gordon as a teen, who undergoes rehabilitation at Arkham after an accident leaves her paralyzed. On the night in question, Barbara had been trying to save someone and gets shot, and in the aftermath she feels her life has been broken to pieces; she isn’t sure how to put it back together or what to do going forward. At Arkham, she is angry at her state, but also more angry about how her friend has been distant from her since the accident. She makes new friends at the center, but still feels the loss of her friend. When one of her new friends, a quiet girl who tells her scary stories says that her brother has disappeared from Arkham, she is assured that it the girl’s way to cope with the loss of her brother in the fire that destroyed her family. Barbara tries to help her, especially because things don’t seem to add up when it comes to Arkham, but it isn’t until the girl herself goes away, that she starts to get suspicious, and starts to investigate whether the kids who had to leave actually left or are missing. The plot is also interspersed with the horror stories that the girl says, and they are distinct in artwork from the main plot, which features a monochromatic background scheme with characters in focus using vivid colors; I am not entirely enthused with it, but it is nice. The tackling of eugenic and ableist ideologies in this story about disabled teens felt powerful; it also sort of complements Barbara’s own arc about accepting her life, and not just being resigned to it, and figuring out that she can still do what she does best – put the pieces of the puzzle together.

Is it diverse? ownvoices disability rep

Received an advance reader copy in exchange for a fair review from DC Comics, via Netgalley.