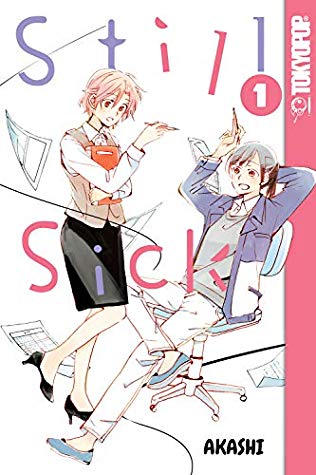 Makoto Shimizu is just an ordinary office worker, blending in seamlessly with her colleagues going about her day to day life… that is, until her coworker Akane Maekawa discovers her well-hidden secret: she draws and sells girls’ love comics! Maekawa is the last person Shimizu would accuse of being an otaku, but as her interest in Shimizu’s art blossoms, the two grow closer, and it seems like Maekawa may have a secret of her own…

Shimizu is an ordinary seeming office worker, but she is an artist in her spare time and writes doujinshi for her sapphic ships. Her secret as an otaku is discovered by Maekawa, who finds her at a convention and expresses interest in her yuri work. Maekawa becomes an adorable nuisance for Shimizu, but she soon discovers there’s another side to her. As a romance story, firstly, it feels a bit cliche, and even the twist sort of plays on an old cliche. So, I am not entirely convinced in them as a couple so far, but let’s see where that goes. Individually, though, there plenty to dig into. First – Shimizu, who is afraid to come across as a ‘predatory lesbian’ stereotype from the nature of her work, and so much is her fear that she doesn’t really have close female friends. So when Maekawa, who is adorable and popular, takes an interest in her, she gives in because of the force of her personality and also because she finds her cute. Now, Maekawa, meanwhile, has one heck of a backstory, so I didn’t like how she messes with Shimizu. The contrast in the earnestness of one character and the cynicism of the other would make for an interesting dynamic, though more prone to conflict, TBH. The artwork is simple, with clean lines, and doesn’t clutter the panels, so it is aesthetically nice; the humor also is put in at good points.

Is it diverse? sapphic romance; set in Japan

One thought on “Review: Still Sick, Volume 1 by Akashi”