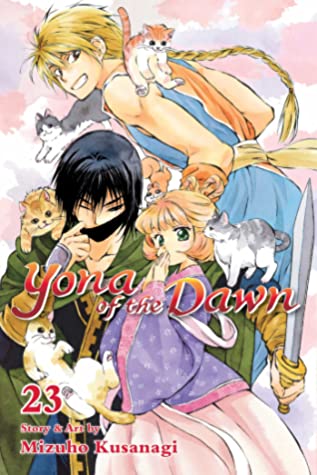 With the truth about the dragons’ presence out by way of Zeno’s valiant rescue, it is increasingly dangerous for the bunch to stay in Xing kingdom. Public sentiment against them has risen, calling them monsters and such. And while Princess Tao wants them to escape as soon as possible, Yona is starting to think that maybe she should intervene, to use her power to help Xing from being invaded by Kouka. But before she can act on that, the dragons are kidnapped by Princess Kouren’s men, and while they could’ve escaped, not flaming the animosity against them in Xing wins out over self-preservation and they allow themselves to be taken.

The story is once again heading into an intense story arc, with tensions between Xing and Kouka rising again. It also isn’t simply about Kouka trying to invade them – Xing has had a bad past with Kouka, in which Su-Won’s father had committed war crimes on their soil. So resolving things with Kouren, who still holds this against them, but also remembers Yona’s father’s apology after that, is a tense issue. For now, she is ready to give Yona time to prevent the war, while holding the dragons’ lives as leverage. And Yona herself has to finally get back to Kouka and confront Su-Won, the one thing she has been avoiding all this time. Su-Won himself has let Yona and Hak and the others live, so long as they don’t interfere – or at least, that what it has seemed like so far. So, being anxious about it all is an understatement.

One thought on “ARC Review: Yona of the Dawn, Vol. 23 by Mizuho Kusanagi”