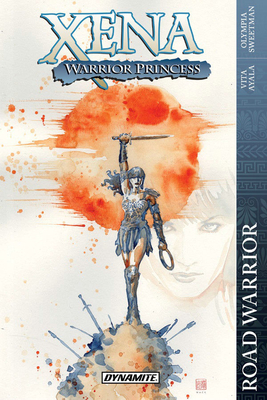 In a time of ancient gods, warlords and kings…a land in turmoil called out for a hero! She was XENA, a mighty princess forged in the heat of battle! In this all-new series, writer VITA AYALA (Black Panther, Shuri, Wonder Woman, The Wilds) and artist OLYMPIA SWEETMAN throw Xena and her companion Gabrielle headfirst into a mysterious adventure. Can Xena discover the secrets of a village full of super-strong children, before jealous and petty GODS get involved?

A new Xena series that has her and Gabrielle getting caught up in Discord’s schemes, and thus having to babysit the depowered goddess through various points in the world. When Xena and Gabrielle roll up to a village where there is a curse, and they are going to lose their children, they decide to help. Unfortunately for them, Discord is involved in the curse, and she tries to take her payment – when the other Olympians intervene, Discord is punished by the loss of her powers, and they all, Xena, Gabrielle and Discord are sent to the ‘ends of the earth’ which is somewhere in Central America. There they have to make another deal, and end up in Transylvania, then Russia, getting mixed up in the lore of Vlad the Impaler and Baba Yaga. Discord is a bratty tag-a-long for them, for the most part, but she is also quite helpful, especially in the vampire’s castle. It is a long adventure for them to get back home, but it is quite enjoyable, and the story stands on its own without requiring you to be familiar with the original franchise. The artwork is okay; it didn’t impress but it was nice enough. Overall, it is a fun read!

Is it diverse? Xena and Gabrielle are shown to be in a sapphic relationship

Received an advance reader copy in exchange for a fair review from Dynamite Entertainment, via Edelweiss.