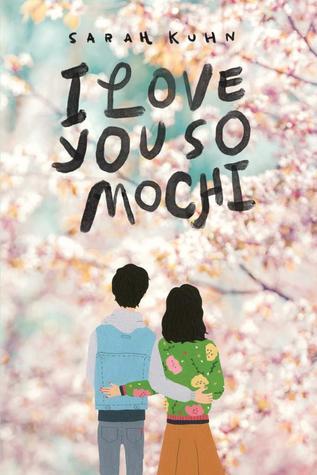 I Love You So Mochi by Sarah Kuhn
My rating: 3 of 5 stars

She’s obsessed with transforming everyday ephemera into Kimi Originals: bold outfits that make her and her friends feel like the Ultimate versions of themselves. But her mother disapproves, and when they get into an explosive fight, Kimi’s entire future seems on the verge of falling apart. So when a surprise letter comes in the mail from Kimi’s estranged grandparents, inviting her to Kyoto for spring break, she seizes the opportunity to get away from the disaster of her life.

When she arrives in Japan, she’s met with a culture both familiar and completely foreign to her. She loses herself in the city’s outdoor markets, art installations, and cherry blossom festival — and meets Akira, a cute aspiring med student who moonlights as a costumed mochi mascot. And what begins as a trip to escape her problems quickly becomes a way for Kimi to learn more about the mother she left behind, and to figure out where her own heart lies.

The story is mainly about a Japanese American girl visiting her maternal grandparents for the first time, over spring break, to connect to her Japanese roots, as well as figure out her life. Kimi has both creative parents – her dad runs a fushion restuarant and her mom is an artist, and when she was a child she took interest in arts too, so her mother focuses on getting her a good art education and stuff. Thing is, Kimi isn’t sure she is that interested in art now; she prefers designing clothes for herself and her friends. She also rejects her mom’s idea to go to art school, so the trip is a way for her to come up with a different plan that appeases her mother. When she arrives, she finds her grandfather friendly enough, but her grandmother seems a bit distant, so she tries to find a way to connect with her. Aside from that, she goes out to explore the city on her own, and finds a friend/guide in Akira, a high school student who is helping out his uncle at his mochi shop.

Now, firstly, the thing that frustrated me was that it took so long for either Kimi or Akira to come up with her career plan. Kimi is like ‘I love making clothes’, and ‘I get inspired by things around me’ and ‘my clothes are quite inventive and out there’ and all the while I am here screaming like ‘you need fashion design school, girl!’ and yes, they do arrive at that conclusion but in the age of the internet, it shouldn’t take you TWO WEEKS to do that! The romance was also sort of meh – they are cute, sure, but it has only been two weeks! Her hesitation over starting anything was justified and I wished it was just left at that, maybe having something starting but not as much as it progressed to. Also, I practically laughed at the fact that despite knowing barely any Japanese, she was able to navigate the city and talk to people like yeah sure, Jan.

And now, for the thing I did love about the book – Kimi’s connection with her grandparents. It was so well done as a story, because her mom hasn’t been much in contact with them over a fight when she was young, and Kimi becomes a bridge for them to reconcile. It also tackles parental expectations in both generations – how Kimi’s grandmother expected certain things from Kimi’s mother, and how Kimi’s mother expected a certain path for Kimi, and how to communicate those differences and work through them. I loved that part, especially because it also involved cultural differences, and the fact that Kimi’s mother was a first-generation immigrant, and so her relationship with her parents is different from Kimi’s father’s, who is a fourth-generation Japanese-American, I think. Oh, and I loved the places that Kimi went to, not just the tourist spots but places like her grandmother’s favorite place to get clothes or sewing supplies, or her grandfather’s favorite shop to buy snacks. The narrator was good enough (mostly I was thankful for the pronuncations lol).

Overall, it was cute and I liked the focus on family in the storyline, but otherwise it was sort of an okay read.

One thought on “Audiobook Review: I Love You So Mochi by Sarah Kuhn & (narrated by) Natalie Naudus”