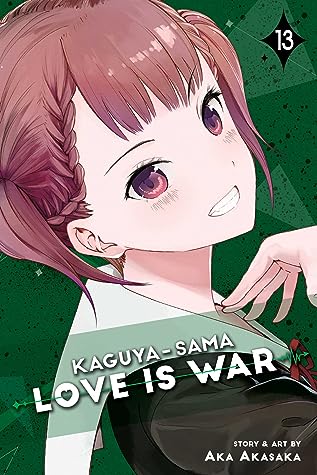 Will Ishigami make a confession of love? Who would date someone who is both an emo gamer and a former school pariah…? Meanwhile, someone is ready to confess her love to Shirogane—and it’s not Kaguya! Then Ino sabotages a romantic tour of a haunted house, Shirogane reveals some unexpected nonacademic skills, Kaguya accidentally dispenses good advice and a fortune teller foretells an ominous date for our pride-crossed lovers—no, not that kind of date. Plus heart-themed key rings, cookies, takoyaki and balloons!

But nobody turns down Stanford.

The school festival begins and romance is in the air, thanks to the theme of the festival capitalizing on a love story. Shirogane is determined and Kaguya has accepted that she loves him, but she also wants him to make the move. Meanwhile, Ishigami, encouraged by Kaguya, tries to get closer to his crush, a third year student who he adores, and while his aim is to spend time with her, things happen such that it becomes a public declaration of his love for her. So both Shirogane and Kaguya are hanging on how his confession will go, because it will determine the general atmosphere of their group in the upcoming days. Other than that, well there are a lot of festival shenanigans going on in this volume: Kaguya being a Taisho-style maid for her cosplay’s cafe has her serving the ramen king (yes, that one in that one bonus chapter with Chika) who determines her tea-making skills to be full of love, in front of Shirogane, so that sort of ruins her chance. Then there is Ishigami’s class’ horror house which goes the audio route for maximum scare, and we get to see how they created the binaural audio for it (which was informative btw) and I must say, that Makihara is a sadistic character! Oh, and Chika’s younger sister is interested in Shirogane and Chika tries to dissuade her, but it backfires! Finally, well, Shirogane drops his Stanford bomb on Kaguya and I’m eager to find out what happens next!