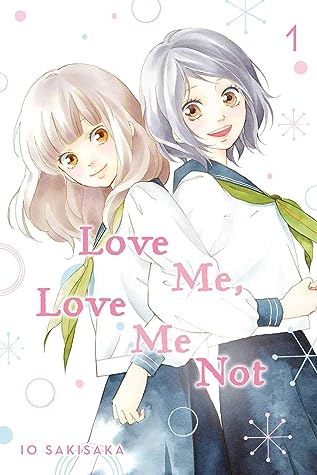 Four friends share the springtime of their youth together.

Fast friends Yuna and Akari are complete opposites: Yuna is an idealist while Akari is a realist. When lady-killer Rio and the oblivious Kazuomi join their ranks, love and friendship become quite complicated!

Love Me, Love Me Not has two friends as main characters who have opposing ideals when it comes to love, and their budding friendship and relationships. Yuna is timid, shy and idealistic – she believes in waiting for love, and wants to be sure of it, while Akari is outgoing, and takes chances on love, and feels that you have to try for it. Both girls are brought together when a chance meeting has Yuna helping out Akari, and them later finding out they are now neighbours (Akari moves into Yuna’s building). Yuna also runs into a boy on the same day she met Akari, who reminds her of a prince from one of the fairytales she loves, and when she finds out he is Akari’s brother, Rio, she admires him from afar. Meanwhile, Akari, seeing Yuna’s childhood friend Kazuomi and the rapport between them, initially tries to set them up but realizes that since Yuna has eyes for Rio, she decides she might only warn her about his penchant for flings with pretty girls. There are other events that set up more of the friendship between the girls, like some girls spreading rumors about Akari, and Yuna, on Kazuomi’s insistence to trust her new friend, standing up for her. There’s also a shocking twist at the end, which adds an interesting dimension to the relationships in the story. This first volume has been, well, underwhelming so far; aside from the twist (which I still don’t know how I feel about), it feels quite generic. The artwork is pretty, though, and I like the emphasis on having both girl’s thoughts about love as valid. Overall, I am in a ‘let’s see how this plays out’ place with this series.