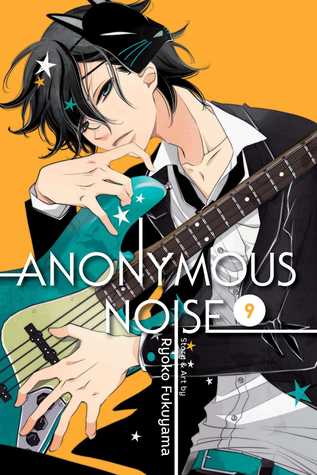 Anonymous Noise, Vol. 9 by Ryōko Fukuyama
My rating: 3 of 5 stars

At long last, In No Hurry’s nationwide tour has begun! Amidst the excitement, Yuzu—who can no longer deny his feelings for Nino—has finally declared war on Momo. And Momo, sensing the threat from Yuzu, has hardened his own resolve. But as the tour heats up, a big surprise is in store for them both!

In No Hurry starts their tour, and they seem to getting off on a good start, but the love triangle between the three is threatening to play with their psyche. Yuzu is worried that when Momo meets Nino again, he will lose his chance to ever tell her about his feelings. Meanwhile, him withdrawing a bit has Nino worried and she starts to lose her momentum. And at the performance in Shibuya, Yuzu has a health scare, so Nino and the others start their performance in a different way to pave the way for his entry back, but Momo also comes through in the last minute.

This volume also has us knowing bits about the first few meetings of Black Kitty, and how Miou and Momo changed the reasons they were in it for. We also get to see Yuzu’s childhood and how his mother stopped him from playing. These crucial character-defining moments weren’t given enough page space, in my opinion, and I wish that would have been the focus. The band playing scenes weren’t as impressive this time around, either, with the rushed quality of the story. Still, it does tease something momentous happening in this performance, with an ominous quality, and it has only begun, so I suppose the next volume will be better at exploring Yuzu’s past.