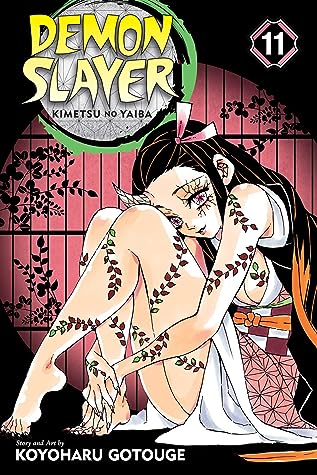 Demon Slayer: Kimetsu no Yaiba, Vol. 11 by Koyoharu Gotouge
My rating: 4 of 5 stars

The battle against the powerful sibling demons Gyutaro and Daki is not going well. Although finally able to fight alongside Tanjiro against the monsters, Zenitsu, Inosuke and even the Hashira Tengen Uzui get knocked out of the fight, and Tanjiro stands alone. Battling even one of Lord Muzan’s Twelve Kizuki is hard enough for one of the top Demon Slayers—what chance does Tanjiro have?

This volume is full of the fight between the sibling monsters Gyotaru and Daki, and the demon slayers. While Uzui and Tanjiro try to battle the brother, Inosuke and Zenitsu are trying to subdue the sister. In both cases, they are outmatched, since these demons are of the upper rank, and with the specific abilities of their bodies, it is quite difficult to behead either of them, let alone both of them. The battle pushes them beyond their limits, with Tanjiro experimenting with combining different styles and understanding specific styles that the hashira have, and Zenitsu bringing out a powerful but can-only-activate-once move. They come close to winning and defeat, both, several times, and it is practically a fight to see who outlasts the other before they collapse. Uzui himself had entertained the idea of retiring after killing one of the Kizuki demons, so this fight becomes extra special to him, both in terms of a final mission and a hope for a quieter future. Honestly it is non-stop beautifully drawn action from start to finish, so it will keep you on your toes.