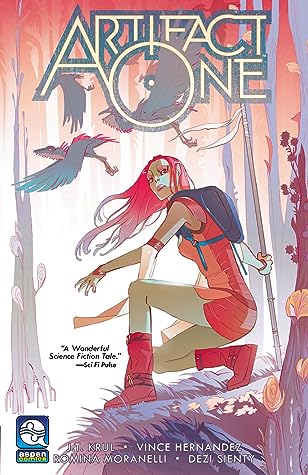 Introducing Remi, a young and energetic explorer and relic hunter, whose boundless curiosity leads to a startling discovery beyond anything she could have imagined! Along with her alchemist father, Remi works in secret, away from the prying eyes of the ruling clerics who lord over the realms of her world with their ancient decrees and strict devotion. Remi has her own sense of dedication – Her heart to adventure and her mind to the truth. But, what happens when that truth could change the fate of her entire planet, and destroy the very fabric of her civilization?

At first, I thought this was a medieval fantasy, what with the persecution of scientists/alchemists by a religious order, with the exception being that the people look like aliens. And I was kinda right, since this does concern aliens, but in a very different perspective than we usually expect from alien sci-fi stories. Remi, like her scientist father, is an explorer and very interested in observing nature and figuring out how things work, both things shunned by the religion of their land, so they usually are low-key about it. When someone sells them out, though, she is forced to go into hiding, and she is also carrying a mysterious artifact made of an unusual metal she found during her exploring. She moves from place to place, trying to be out of the radar of the soldiers. She tries to investigate the artifact on her own and finds some answers, but it leaves us with more questions.

When I first saw the artifact, I was operating on a certain theory as to what it means on this planet, so I was surprised by the actual twist towards the end. It is a different angle for this kind of story, and it also has me interested in what has happened since then, and why the religious order resembles a particular religious doctrine from Earth. The artwork has pleasing aesthetics and I like the character design for the most part! I still have a lot of questions about Remi’s society and why the artwork made certain choices, but I suppose those will be answered in future volumes. For now, this was quite an interesting start!

Received an advance reader copy in exchange for a fair review from Aspen Comics, via Edelweiss.