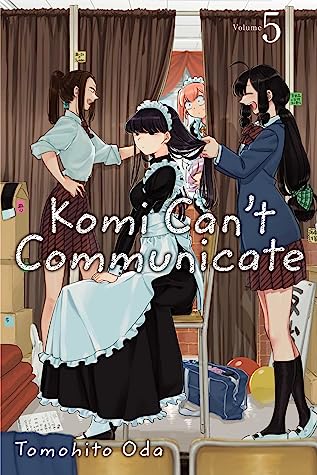 Socially anxious high school student Shoko Komi’s greatest dream is to make some friends, but everyone at school mistakes her crippling social anxiety for cool reserve. Luckily she meets Tadano, a timid wallflower who decides to step out of his comfort zone in order to help her achieve her goal of making 100 friends.

Komi’s friendship quest just hit its first major obstacle—the green-eyed monster! Tadano and a girl named Mine have been hanging out a lot lately, and Komi doesn’t know how to deal with her sudden flood of jealousy. She can’t just explain what’s wrong, so she ends up spying on them from the shadows. Will her creepy peeping lose her a chance at a new friend and push Tadano away?

Another potential friend pops up for Komi, in this volume, in the form of Onemine, who sort of big-sisters Tadano; she also catches on to the relationship between Komi and Tadano pretty fast. Komi is starting to feel a bit more confident in voicing her wants and desires, especially when it comes to hanging out with her friends now (they have a couple of outings), and while still anxious she is able to have fun with them. There are still a lot of moments where her communication disorder makes things difficult for her, but the tone is always like – if she gets understanding and support, it works out for her. This volume also has the class organizing for the school festival and they decide to have a maid cafe; this leads to a lot of shenanigans on Najimi’s part! We also get a lot of cute moments, especially with Komi and Tadano, with the former crushing on the latter, while the latter is oblivious. Yamai trying to creepily (when it is not?) get upskirt views of Komi left a bad taste, though. And that 30-something dude who is like a maid cafe enthusiast? Yikes.