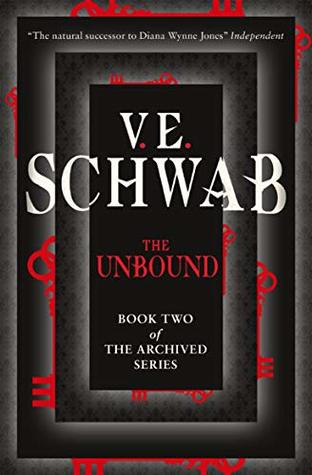 The Unbound by Victoria Schwab
My rating: 4.5 of 5 stars

Imagine a place where the dead rest on shelves like books. Each body has a story to tell, a life seen in pictures that only Librarians can read. The dead are called Histories, and the vast realm in which they rest is the Archive.

Last summer, Mackenzie Bishop, a Keeper tasked with stopping violent Histories from escaping the Archive, almost lost her life to one. Now, as she starts her junior year at Hyde School, she’s struggling to get her life back. But moving on isn’t easy — not when her dreams are haunted by what happened. She knows the past is past, knows it cannot hurt her, but it feels so real, and when her nightmares begin to creep into her waking hours, she starts to wonder if she’s really safe.

Meanwhile, people are vanishing without a trace, and the only thing they seem to have in common is Mackenzie. She’s sure the Archive knows more than they are letting on, but before she can prove it, she becomes the prime suspect. And unless Mac can track down the real culprit, she’ll lose everything, not only her role as Keeper, but her memories, and even her life. Can Mackenzie untangle the mystery before she herself unravels?

The second (and currently, final) installment in the Archived series brings Mackenzie into a different setting – high school. While The Archived had her running around as a Keeper during the summer, when she only had her parents to look out for, in this book, she has to juggle school, parents, and an Archive official, while fulfilling her duties as a Keeper. This book also starts off 3 months after the events of the previous, so some Things have happened and time has passed, but she is still haunted by Owen and unsure of what is going on with Wesley. Add to that, newer incidents of people disappearing have started, and all those people had one thing in common – she was perhaps the last person to cross their paths. Keeping her job as a Keeper becomes more difficult when they, and the local police, both, suspect her.

Mackenzie, traumatized from how she got rid of Owen, and how close she had come to being pushed into a void, is not recovering from the incident. She has nightmares, she starts seeing Owen everywhere in her regular life, blacks out, and she becomes sort of an unreliable narrator in that she isn’t sure of what is real. She is afraid of her own vulnerabilities and whether she has finally cracked under the pressure of being a Keeper, and the incidents of the summer. She leans on Roland and Wesley in this book, but ultimately she also has to do things her own way to keep them from being targeted by one of the higher ups of the Archives, Agatha for treason, if not for being involved in the disappearances of random strangers. The Archives’ organizational structure becomes more important in this book, as we see more the Crew around, as well as other members.

Speaking of Crew, Wesley and Mackenzie are practically a pair made for the position, but the lifelong nature of the commitment also has Mackenzie afraid to think of the romantic aspect of their relationship. He has been flirty in the previous book, but here they are almost pretending to be a couple in front of her parents (giving her an easy excuse when she has to go into the Narrows), so its different. Also, with both of them in the same school, she finds a different side of Wesley, and her understanding of him deepens further; she also has another interested party vying for her attentions, but honestly that dude didn’t stand a chance against Wesley.

Towards the end, we start to get a sense of what a sequel would entail, so its sad that there isn’t one to read. However, the conclusion in this book is solid enough, that it serves well as a complete sequel. It fulfils her character arc when it came to her life, her relationships and her standing with the Archives, and also closes the chapter on the Owen story in a definitive way.

Previous book in The Archived series

2 thoughts on “Review: The Unbound by Victoria Schwab”