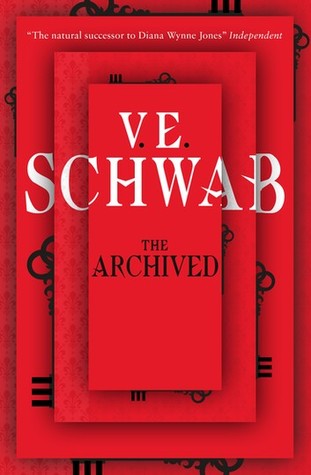 The Archived by Victoria Schwab
My rating: 4.5 of 5 stars

Imagine a place where the dead rest on shelves like books.

Each body has a story to tell, a life seen in pictures only Librarians can read. The dead are called Histories, and the vast realm in which they rest is the Archive.

Da first brought Mackenzie Bishop here four years ago, when she was twelve years old, frightened but determined to prove herself. Now Da is dead, and Mac has grown into what he once was: a ruthless Keeper, tasked with stopping often violent Histories from waking up and getting out. Because of her job, she lies to the people she loves, and she knows fear for what it is: a useful tool for staying alive.

Being a Keeper isn’t just dangerous—it’s a constant reminder of those Mac has lost, Da’s death was hard enough, but now that her little brother is gone too, Mac starts to wonder about the boundary between living and dying, sleeping and waking. In the Archive, the dead must never be disturbed. And yet, someone is deliberately altering Histories, erasing essential chapters. Unless Mac can piece together what remains, the Archive itself may crumble and fall.

In this haunting, richly imagined novel, Victoria Schwab reveals the thin lines between past and present, love and pain, trust and deceit, unbearable loss and hard-won redemption.

The Archived has an interesting take on the afterlife, with a person’s memories being stored for archival purposes, and Mackenzie is like one of the guardian of the place. Before starting this book, I thought that the person’s life story was stored in a book, like, you know, the Library of the Neitherlands in The Magicians, so it was a big surprise for me that they store it in bodies called Histories- not the person’s actual body, but like a life-size replica that is pretty much the same body but not. This made Mackenzie’s job as a Keeper harder, because these Histories can wake up, walk around and escape from the Archive, through the middlespace called the Narrows, and into the Outer, our world, and its her job to guard the exit to the Outer. And with her set of circumstances, having had a Keeper as her grandfather, having lost her kid brother about a year ago, it is also a unique exploration of grief in that she knows the answer to the question – what comes next? – but it also isn’t entirely a comfort for her.

I’m getting ahead of myself, though, because the plot is a mystery plot – Mackenzie’s new home has been the site of a murder, and she knows this because she can read the past of things she touches (and even pick up on people’s emotions, but I’ll come to that later). The cold case aspect of the murder coinciding with Mackenzie’s specific talents means you get an investigation that has an entirely separate cache of available information. The weird deaths in the aftermath of the murder were wipe not just from history but also from the Archives, but Mackenzie can eke out some things tangentially. And she has to do this while living with parents who are still grieving, and so are kinda absent but not wholly so, as she still has to keep her job at the Archives a secret from them – a secret that occupies a lot of her time and has her wandering into another dimension for long stretches of time. Add to that the fact that her ‘workload’ increases, and there are quite a lot of unlikely things happening in the Narrows that shouldn’t be happening, like a History who isn’t like other Histories.

One thing I liked was how her abilities as a Keeper define her life choices – like I said before, she can sense emotions off people, which brings up sensory issues, obviously, and has her keeping a physical distance from people; her need to keep her Archival job secret and the lying for it means she also has to keep a metaphorical distance. The way her relationship with her parents was shaped around these facts is an element that was included, which made for good handling of the ‘absent parent’ trope. Her other relationships, like the one with Wesley, who also has things in common with her, and with Owen, who provides her comfort, also stem from those points of her abilities.

I loved the writing, obviously, and how the different places were constructed. It is in first person, but it also cut in between with second person, where she addresses her grandfather, and Mackenzie’s PoV does so well in helping you visualize the scenes. You can feel the creepiness of the Narrows, with how it is described, with how Mackenzie’s own fear of the space during attacks is played out. Even the Archives, evoking images of an elegant library in its description, gives you a colder feeling coming from Mackenzie, which says a lot about her characterization itself. There were points where I was sort of reminded me of City of Ghosts – with the, you know, dead people thing, but also with how Cassie and Mackenzie are both sort of gatekeepers as well as psychopomps, leading the restless dead back to their rest, the similarities in them having to duck their parent’s notice, having a ghostly boy in their lives – I couldn’t help but compare the vast differences in characterizations between these two characters who have similar circumstances, only that Mackenzie is coming from a place of grief; I dunno where I am going with this, it was just something that occurred to me!

Overall, it is an engaging read, with a character who takes you alongside her in the story, and a world construction that feels just adequate.

One thought on “Review: The Archived by Victoria Schwab”