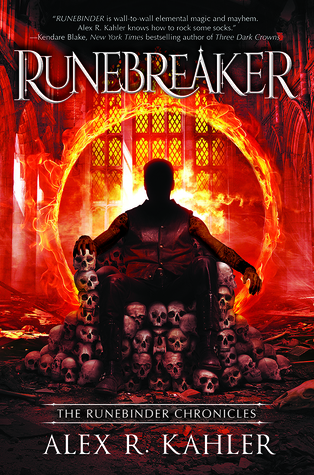 Runebreaker by Alex R. Kahler
My rating: 3 of 5 stars

Aidan desires only one thing: to rule. Arrogant, headstrong and driven by the element of Fire, he will stop at nothing to bring the evil Howls that destroyed Scotland to their knees. But Fire is a treacherous element, and the very magic that brought him to power could burn his world to ash.

Especially with the blood of his fellow Hunters on his hands.

Driven by a bloodlust he can’t control and dark whispers that may not be entirely in his head, he and his magic-eschewing friend Kianna will do whatever it takes to liberate their broken world. Even at the risk of confronting the Church. Even at the risk of losing his humanity.

But power isn’t the only thing on Aidan’s mind. He’s falling for the intoxicating Tomas, an Incubus who offers everything Aidan desires. For a price.

And if that price burns the world down, well… Aidan is used to playing with Fire.

The thing about Runebreaker is that unlike Runebinder, it throws you directly in the plot without any information; it also doesn’t help that we haven’t even heard of Aidan, yet suddenly we are into a scene where he is breaking away from his co-commander/boyfriend Trevor, and we honestly don’t know what to think of the scenario. Details about the characters, the timeline with respect to Runebinder and their landscape trickle in slowly, so it is somewhat confusing in the first half. It is a reversal from Tenn’s story, though, in that Aidan is in a way, a polar opposite to him, and I feel like the story establishes itself in that vein.

Aidan, who is aligned with the Sphere of Fire, is tempestuous, impulsive and ambitious – he seeks to destroy the Kin who is occupying Scotland and establish himself as the King. He wants glory and power, two things that Tomas keeps whispering he can give him, and Aidan is quite susceptible to his siren song. He is also a frustrating protagonist to read through, because he KNOWS he can’t trust Tomas, but he is easily lured by dreams of grandeur. Unlike Tomas and Tenn, their romantic arc somewhat works. Meanwhile Aidan is also getting visions from the Dark Lady who is manipulating him and you start to wonder who is on whose side here. Aidan cares for only one person in his life, his best friend and travel companion, Kianna, who is quite like him in nature, but isn’t rash like him. Theirs is an interesting dynamic in that they know if one goes bad, the other will kill them without hesitation, but also they understand each other at the core.

The plot feels very short in a way, because a lot circles around Aidan and him being all ‘I want it all’ while letting the world burn, and then suddenly they are caught in a trap, and have to get out, so by the end you are like ‘that’s it?’ and also it feels longer, because it just couldn’t hold my attention, so I had to read it in many installments over the course of days despite its short length (honest – Kindle told me it would take only 3.5 hours for me). The ending brought some respite, but that may be mainly because the actual plot of Hunters vs Kin will finally move forward.

Overall, it is a frustrating book to get through, with an unlikable protagonist, and a plot that doesn’t do much, but fill some blanks about the magic of the world. It does, however, make a nice contrasting companion to the first book.

Received an advance reader copy in exchange for a fair review from Harlequin Teen, via Edelweiss.

Previous book in the Runebinder series