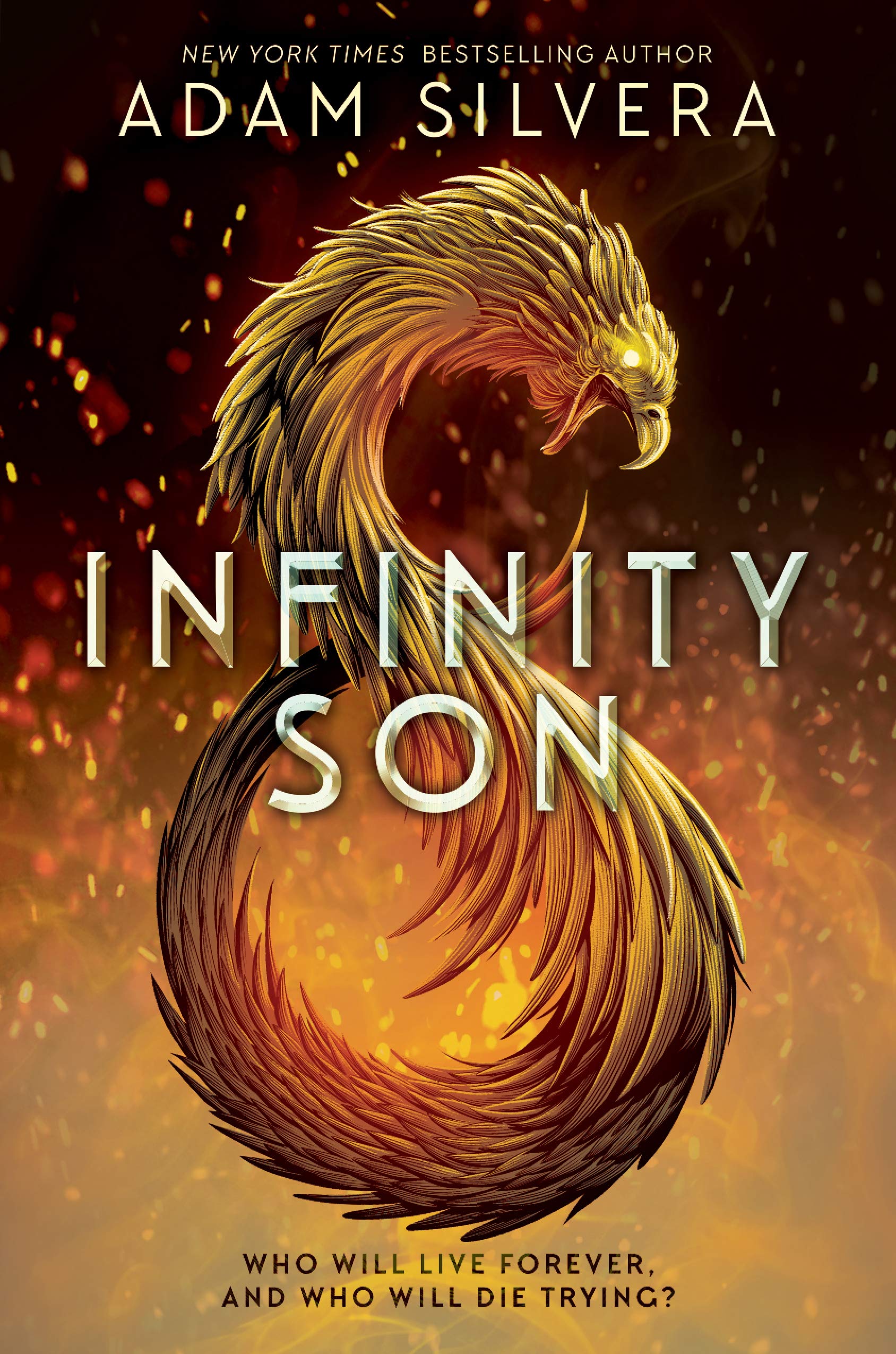 Infinity Son by Adam Silvera
My rating: 3.5 of 5 stars

Growing up in New York, brothers Emil and Brighton always idolized the Spell Walkers—a vigilante group sworn to rid the world of specters. While the Spell Walkers and other celestials are born with powers, specters take them, violently stealing the essence of endangered magical creatures.

Brighton wishes he had a power so he could join the fray. Emil just wants the fighting to stop. The cycle of violence has taken a toll, making it harder for anyone with a power to live peacefully and openly. In this climate of fear, a gang of specters has been growing bolder by the day.

Then, in a brawl after a protest, Emil manifests a power of his own—one that puts him right at the heart of the conflict and sets him up to be the heroic Spell Walker Brighton always wanted to be.

Brotherhood, love, and loyalty will be put to the test, and no one will escape the fight unscathed.

Silvera writing an urban fantasy was exciting enough, but it being about a modern world shaped by the existence of the magical was the thing that had me most excited about the book. Firstly, I would like to say that gave me a lot of X-men vibes, with the celestials being these powered humans who are kind of treated like superheroes but also reviled for being different. Along with the celestials, there are also magical creatures like phoenixes and hydras and stuff, and people have been harnessing the magic for quite a while now. At first, it seemed like the fight was with the regular folk who don’t like magical folk. But, as the book goes on, we see that the main conflict in the book is between two factions of the people who differ in their way of using magic, and how they let the rest of the world treat them.

Emil and Brighton are twins, who have been fans of the celestials since childhood, and had hoped that since they also had a celestial in their family line, they might one day grow in to their powers. Now, on the cusp of 18, Brighton is a YouTuber who focuses on the celestials in New York, while Emil wants to study phoenixes; while the former still hopes of becoming a celestial, the latter is not really interested anymore, especially with their lives in so much danger from the government who doesn’t treat them fairly. That, and since a devastating incident less than a year ago, public favor has gone down. Maribelle, the daughter of the celestials involved in that incident, is out to clear her parents’ name, and is also one of the members of the Spellwalkers, a group of celestials in hiding. They clash with a group of powered people called Spectres, whose abilites are not inborn like celestial, but achieved through alchemy that requires the blood of magical creatures; Ness is one of them.

When Emil manifests his powers, everybody thinks he is a Spectre who consumed the blood of a phoenix; he is rescued by the Spell Walkers but the Spectres are also after him. He doesn’t like that he is being pulled into a war between the two sides, and is being turned into a weapon. However, the Spectre’s plans means he does have to train, and fight against them. Meanwhile as Emil’s star rises, Brighton tries to be a part of this world, by offering to be like the Celestials’ PR person, to put out content that shows them in a good light, to offset the vitriol being hurled against them. This is while the country is in the middle of a presidential campaign, where one candidate is anti-Celestial, and the other is a Celestial.

There’s an interesting difference of opinion between the brothers, where one abhors the Spectre’s method of harming creatures, while the other is ambiguous about it. Their own personal arcs are about their view of what being a hero means – Emil has reservations about violence, sure, but he also feels that he doesn’t suit the ‘hero’ image with his lanky body; he also doesn’t like Maribelle being cut-throat about killing. Brigton, who has always wanted to be a hero, is disappointed that he doesn’t gain powers, and he has a complex about it; there’s such a good build-up of his storyline to lead to what happens in the ending; honestly there were many times in the plot that I thought it might happen already. Maribelle and Ness have minor storylines, too, but it sort of pales in comparison to the two brothers’ stories and everything else going on in the plot; if anything, their PoV only serves to fill in some blanks.

Finally, while I was excited about an urban setting with the supernatural winded in its history, I feel the world-building was lacking in some aspects. Sure, there were small snippets that hinted at what changes magic would bring to our world, and there were many parallels that retained the connection to our world, but at its core, it doesn’t explain anything for us. And yes, since the characters already live in the world and thus wouldn’t need to be explained about how it works, the lack of any clear exposition starts to get confusing at times. Like, I don’t know what the collective term for all magical entities was; while the Spectres and the Celestials are kind of like rival gangs, their make-up is more from ideology than the source of their abilities, so the naming makes no sense; their fight also seemed localized for something that affected the world at large; what the difference is between the alchemists and the gleamcrafters, I don’t really know. Also, yeah using the same plot twist twice? Eh…

Overall, I would say it is an exciting origin story-ish for two brothers, in an urban fantasy built on an X-men like premise, but it could have done with more attention to how the world works.

Received an advance reader copy in exchange for a fair review from HarperTeen, via Edelweiss.

One thought on “ARC Review: Infinity Son by Adam Silvera”