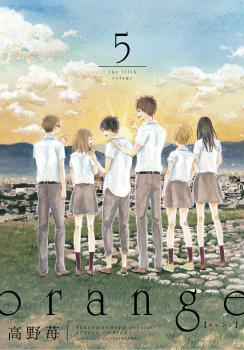 Orange 5 by Ichigo Takano
My rating: 4 of 5 stars

On the day that Naho begins 11th grade, she receives a letter from herself ten years in the future. At first, she writes it off as a prank, but as the letter’s predictions come true one by one, Naho realizes that the letter might be the real deal. Her future self tells Naho that a new transfer student, a boy named Kakeru, will soon join her class. The letter begs Naho to watch over him, saying that only Naho can save Kakeru from a terrible future. Who is this mystery boy, and can Naho save him from his destiny?

So, in this finale book, things are getting closer to the date when Kakeru attempted suicide. We get two versions of events, one of the original timeline, from the start, in snapshots, through Kakeru’s eyes, and what led him to that day, and the present time, as they, reasonably assured that they have given him enough happy memories and hope to live for, are still nervous about the day itself. It is tense, and a lot about love and support, but we get to a nice conclusion. We also see how they all in the future had sent back the letters in the past (less scifi and more fantasy, in that aspect, I gotta say). The portrayal of Kakeru’s depression was realistically written, and I loved how all of their friendships have supported him in the current timeline. There are a few tear-jerker moments, too, but I will leave that to you to discover for yourself.

Is it diverse? Depression rep