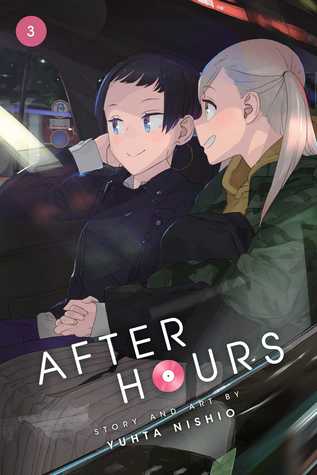 There’s always something going on at night. Sooner or later, you’ll find your scene.

Emi Asahina is 24, unemployed and not really sure what she wants to do with her life. When a friend invites her to a dance club, Emi doesn’t expect much. But what she finds will change her world!

Emi, Kei and their friends have successfully planned the rave of their dreams, and the experience has filled Emi with an electric need to keep striving. But will Emi’s newfound focus and determination falter when Kei, her mentor and girlfriend, goes AWOL?

Note: Not a YA novel.

The first part of this volume was all about the rave they organized, how it goes, etc, and then it drops a new plotline out of nowhere in the second part. Like, I enjoyed the first part, and the ending, because Asahina gets to a point where she can be independently thinking about her future, but what the heck was that whole subplot dropped in the middle? And towards the ending, no less! Firstly, why would Kei go missing without telling Asahina??? It is never explained properly why she couldn’t just tell her she had family stuff? Kei may be impulsive but she isn’t the sort to ghost someone (unlike someone else *sideyes Asahina*) so that whole subplot felt like it was shoved in just to manufacture some tension and have Asahina move fast towards the next phase in her character arc. Miscommunication is hardly ever a good plot point, and I will admit it pissed me off when it happened, especially when it was resolved so easily. Anyway, it ended, and honestly, it deserves a proper epilogue.

Is it diverse? sapphic romance

Previous books in the After Hours series