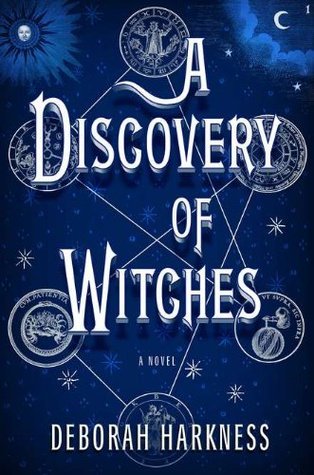 A Discovery of Witches by Deborah Harkness
My rating: 4 of 5 stars

Deep in the stacks of Oxford’s Bodleian Library, young scholar Diana Bishop unwittingly calls up a bewitched alchemical manuscript in the course of her research. Descended from an old and distinguished line of witches, Diana wants nothing to do with sorcery; so after a furtive glance and a few notes, she banishes the book to the stacks. But her discovery sets a fantastical underworld stirring, and a horde of daemons, witches, and vampires soon descends upon the library. Diana has stumbled upon a coveted treasure lost for centuries-and she is the only creature who can break its spell.

Note: Not a YA book. This is adult fiction.

Okay, first off, I totally started this book because of the show – I liked it well enough, and of course had to go read the source material for more info! Now, A Discovery of Witches is urban fantasy in which three supernatural – witches, vampires, and daemons (not demons) – live alongside humans while in hiding. The protagonist, Diana Bishop, is a witch from a prominent family line that stretches all the way back to Salem, but due to her ineptitude for magic, and a fear of persecution like the one that led to her parents’ deaths, she leaves behind that part of her life to throw herself completely in mundane academics, and is a historian whose specialty is history of magic. Her coming across a lost alchemical text sets in motion a race among the other supernatural species for it, including a vampire named Matthew Clairmont, another academic at Oxford, who has been searching for the book in hope of answers to the origin of the supernatural species.

This book is, first of all, quite expansive in its scope of world-building – the three species eyeing each other warily across the centuries has led to a clannish sort of behavior which means they are immediately distrustful of each other and, at time, quite bigoted. Matthew’s and Diana’s acquaintance raises more than a few eyebrows, and when he takes her under his protection, it gets everyone’s hackles raised. Diana herself doesn’t know why the book responded to her, and she really doesn’t have time for this mess, but she is the middle of it, and so has to accept his help. Their relationship develops over the course of this acquaintance, mainly because Matthew is the cultured charming vampire and Diana is a fierce thing to behold. I must say, though, that just on reading, Matthew comes across more controlling that charming; being millennia old doesn’t excuse his chivalry-bordering-on-sexism. (In fact, I think its more because of the actor’s charm that this character was sort of saved for me)

The plot takes us from hiding out in Oxford, to hiding out in a French village, to fall in Diana’s hometown in America, as they try to escape the English coven which is out to control her life. The parts in France started to slow the plot to allow the romance to develop, but the introduction of the Congregation then makes it pick up the pace again. As their relationship develops, the threat to them increases as the species are not allowed to mix. Diana meanwhile trying to figure out the mystery behind the alchemical manuscript opens up her own past, and the secrets buried there. Matthew himself is a mystery to her, with so much of his past unknown to her, and so much of vampire society itself working in the shadows. Overall, it was one hell of a journey for a first book, which while long, is engaging enough for the most part!

One thought on “Review: A Discovery of Witches by Deborah Harkness”