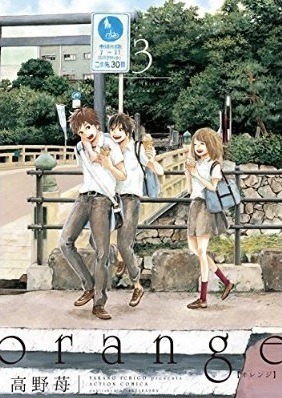 Orange Vol. 3 by Ichigo Takano
My rating: 3 of 5 stars

On the day that Naho begins 11th grade, she receives a letter from herself ten years in the future. At first, she writes it off as a prank, but as the letter’s predictions come true one by one, Naho realizes that the letter might be the real deal. Her future self tells Naho that a new transfer student, a boy named Kakeru, will soon join her class. The letter begs Naho to watch over him, saying that only Naho can save Kakeru from a terrible future. Who is this mystery boy, and can Naho save him from his destiny? Includes chapter three of the bonus story, Haruiro Astronaut!

With Naho realizing that she wasn’t the only one to get a letter from her future self, she gets an ally in Suwa, and the both of them team up to save Kakeru. Between the two of them they are able to change events enough that sometimes the letter’s versions of events are different. Suwa is also able to nudge Naho and Kakeru into admitting their feelings for each other, selflessly at the cost of his own future relationship with Naho. And by the end, we realize they aren’t the only ones in the now (its not a spoiler if it is a reasonable assumption from the end of the last volume!) and they can maybe stop him from killing myself. Naho is a clueless protagonist, TBH, because even 10 years into the future, she doesn’t figure out that Kakeru liked her, and the high school version of her can’t even contemplate him having feelings for her, when it is so obvious to everyone around them. Kakeru’s ex makes an appearance but the two other girls drive her away. All of them are determined to give him happy memories so that he doesn’t feel alone, and Suwa even confronts him about his suicidal tendencies; the latter event didn’t have any kind of follow-up when Kakeru admits to it, like shouldn’t they be suggesting he seeks counseling? However well-intentioned their efforts, they can’t exactly cure his depression and them managing his life and choices through their knowledge from the letters (something that Suwa is starting to doubt is effective) might create complications and change their natural dynamic. Still, it is a good development among the friends about their resolve, and I’m interested to see where it goes.

One thought on “Review: Orange Vol. 3 by Ichigo Takano”