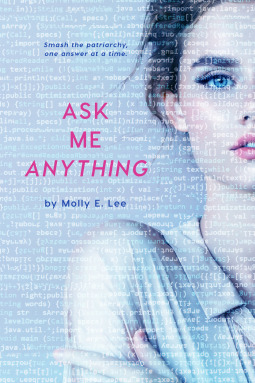 Ask Me Anything by Molly E. Lee
My rating: 3 of 5 stars

I should’ve kept my mouth shut.

But Wilmont Academy’s been living in the Dark Ages when it comes to sex ed, and someone had to take matters into her own hands. Well, I’m a kickass coder, so I created a totally anonymous, totally untraceable blog where teens can come to get real, honest, nothing-is-off-limits sex advice.

And holy hell, the site went viral overnight. Who knew this school was so hard up.

Except now the school administration is trying to shut me down, and they’ve forced Dean—my coding crush, aka the hottest guy in school—to try to uncover who I am. If he discovers my secret, I’ll lose him forever. And thousands of teens who need real advice won’t have anyone to turn to.

Ask me anything…except how to make things right.

The book is mainly about Amber, a teen who decides to make an ask-in blog for relationship and sex advice in direct response to her school’s adherence to an abstinence-only sex ed curriculum. Being the daughter of an erotic novel author and a child therapist, her home environment is open and comfortable, and safe for discussions of sexuality and stuff, so she thinks to extend that space to her fellow schoolmates, too. The fact that she is also a brilliant coder means that she can create an untraceable website to keep her own identity under wraps. She does this while having a sort-of bet with the other brilliant coder in her class, and her crush, Dean, who, in a twist of bad luck, is the one the principal recruits/blackmails into tracking down the source of the website.

The plot is interspersed with the advice column posts, and through it, it imparts some genuinely good advice; there is also a subplot regarding one of the posts that comes between the two of them. Amber’s and Dean’s romance grows slowly from their friendship, and shared interests, and with Amber having come out of a bad relationship she is also nervous to get into another one. Her trauma from the former relationship also affects her ability to trust her judgment and her instincts, because sometimes you necessarily see any red flags early on, and so she has difficulty trusting people. Still, she finds that her making the blog was the most positive thing she could do, and when even that thing starts getting attacked by angry parents, and the school administration, she starts to feel unsure about whether it was okay to give advice when she herself doesn’t know much (the answers she supplies are derived from her parents, btw).

While I like the concept and attention to nuances of teen sexuality in this book, the plot still has a lot left to be desired. Firstly, the book starts with a prologue that is a fight between Amber and Dean, and at this point it is pretty much useless as we have not emotionally invested in the characters so it comes off as a bit over-the-top and dramatic. Secondly, the romance itself isn’t quite interesting; it’s a healthy depiction, yes, but the dialogues are so cheesy at times, I was low-key cringing at times. The school principal being a power-hungry d-bag is not a surprise, but you’d think he wouldn’t be able to get away with these things so long. The ending was a mixed bag, because it goes from 0 to 100 pretty quickly, but I think overall it was pretty okay?

Received an advance reader copy in exchange for a fair review from Entangled Teen, via Netgalley.

One thought on “ARC Review: Ask Me Anything by Molly E. Lee”