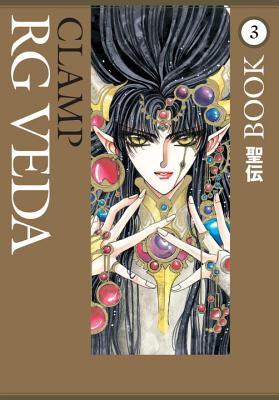 RG Veda Omnibus Volume 3 by CLAMP
My rating: 4 of 5 stars

RG Veda, pronounced Rig Veda, is based on the classic Indian saga of the same name. The Six Stars have at last reached Zenmi Castle to confront the evil god-king, Taishakuten. As the tyrant prepares to kill them, Kujaku reveals the sign given to those who commit the most heinous of sins. Yet greater evil still is held back only by the seal on Ashura, without which the god of destruction will emerge, unstoppable…and if Yasha cannot change his destiny, he must face it–in the conclusion to the epic tale!

This final volume brings about the end in a very explosive way. As the six stars are gathering, they defeat the last of the generals and advance on Zenmi palace, where Taishakuten is preparing for it. It also delves back into the past of some of the characters, notably the previous Lord Ashura, who is revealed to have started all this mess to begin with and Kujaku, who has been watching the mess for a long time. The Ashura’s warning to Yasha to not free him comes to a head, as they unwittingly fulfill a prophecy. (This is why you read the fine print lol) With Ashura on a killing streak to break the seals on him, and the fate of the heavens in the balance, Kujaku reiterates the prophecy alongside the stargazer who foretold it, showing us where it all went wrong. CLAMP does its twists well, like always, switching from a good vs evil stories to telling us there were nuances to it all along. A well-done finale!