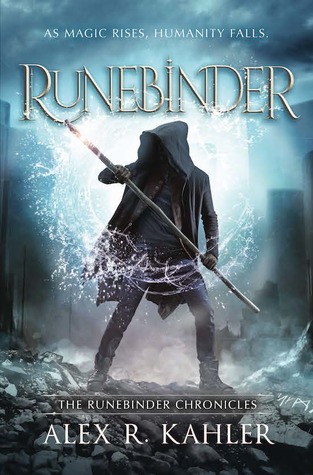 Runebinder by Alex R. Kahler
My rating: 3.5 of 5 stars

When magic returned to the world, it could have saved humanity, but greed and thirst for power caused mankind’s downfall instead. Now once-human monsters called Howls prowl abandoned streets, their hunger guided by corrupt necromancers and the all-powerful Kin. Only Hunters have the power to fight back in the unending war, using the same magic that ended civilization in the first place.

But they are losing.

Tenn is a Hunter, resigned to fight even though hope is nearly lost. When he is singled out by a seductive Kin named Tomás and the enigmatic Hunter Jarrett, Tenn realizes he’s become a pawn in a bigger game. One that could turn the tides of war. But if his mutinous magic and wayward heart get in the way, his power might not be used in favor of mankind.

If Tenn fails to play his part, it could cost him his friends, his life…and the entire world.

Runebinder is a dystopic fantasy set in a contemporary/slightly futuristic world where the rediscovery of magic resulted in the end of the world caused by necromancers. Now, people live in pockets of civilization, with mages called Hunters to protect them from the Kin, people who were turned into elemental creatures and their minions, the Howls. Tenn is a Hunter who, during a routine foraging mission, expends a large amount of power that attracts the attention of several forces. Then, he gets dragged into the world of the Kin’s rivalries, and the Hunters’ plans and prophecies.

Firstly, I want to talk about the world and the rune-based magic system – it is elemental like Avatar, but people can have more than one sphere they can use. Tenn, for example, uses Earth and Water, both of which affect him in some way, but Water causes frequent flashbacks. From the flashbacks, we know about what happened during the end of the world, and how it changed in the three years since. We also learn about the magic schools before the end, when Tenn was just a student at one such school, and where he had met Jarrett, who he meets once again in the present, quite changed and in a leadership position. The Kin and the Howls are also explained through past memories, and how they are created (according to which sphere) determines what kind they become. Tomas, for example, is a fire Kin, and the world has vampires, zombies, incubi/succubi, etc accordingly.

Tenn’s characterization is wariness, mixed in with despair, and he learns to have a little hope by the end of the book. He frequently claims that this is not a chosen one story, but surprise, that is what it is. The ending ends one threat but gives rise to another, so there’s that to look forward to in the next book. The romance is a bit complicated, in that it is a ‘love triangle’ (I don’t like Tomas as a love interest which is why the quotes) and Tomas hints that Jarrett has ulterior motives. For Tenn, Jarrett represents hope for things to be okay like they were before, but their relationship development exists mostly in the past and due to familiarity. They are both different people now, and I would like to see them grow it anew from who they are now, tbh. Tomas can go fork himself for all I care; being an incubus doesn’t mean you can just touch people without their consent or mind control them.

The pacing is slow, not just for the first part of the book, but the latter two, too. There was a lot of exposition to get through, sure, but there’s also a lot of ruminating on Tenn’s part to slow down the pace. There are bits of action here and there, but they don’t pick the pace up much, and Tenn being constantly chased by this one Matthias gets tiresome after some time. The audiobook narrator was pretty good, but the heavier voice given to Jarrett made me initially think he was in his 30s or something, and I was surprised to learn he was only a year older than Tenn. Overall, its a good start to the series.

Is it diverse? Main character is queer, as are some secondary characters