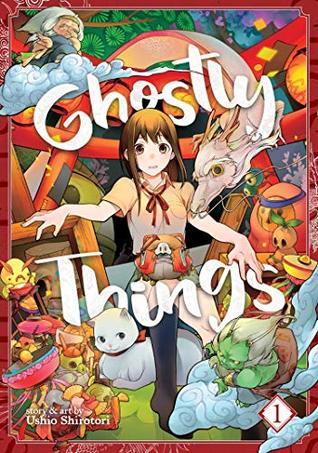 Ghostly Things, Vol. 1 by Ushio Shirotori
My rating: 3.5 of 5 stars

An all-new, beautifully illustrated manga about a girl delving into the secrets of her supernatural house!

With her father off overseas, Yachiho is left to move into a new house all by herself…and it’s a genuine haunted mansion, full of ghosts and spirits! But Yachiho is determined to tough it out. To learn her family’s secrets, can she brave all that lurks in the dark of night?

This is a story about a girl who starts living in a haunted house, and finding out its a crossroads managed by a guardian called Moro. Yachiho is startled but not really fazed – in fact, her main annoyance is with the fact that the spirits are eating her food! The feel of the manga tends towards slice of life, but not entirely. There’s a mystery in the works, that plays between the individual stories about Moro sending on another spirit to their next world, and it has to do with the person who owned the house before, Yachiho’s mission in the house, and a stranger who comes by to catch some spirits. Moro’s interactions with her are mostly humorous, but he also doles out advice on nature and the way of things. She herself doesn’t do much in the story, as of this volume. The artwork is nice, with clear lines and interesting designs for the yokai. I liked the varied kinds portrayed – a dragon, a pair of rain and thunder spirits, and spirits for both rot and growth (the latter, kodama, get a chapter devoted to them). At the same time, yes, it also brings to mind several other manga series that have the same premise or feel of things, so it doesn’t entirely feel distinct enough. Overall, though, it is a good story, and I would love to read further installments.