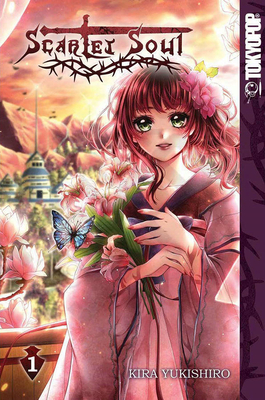 Scarlet Soul, Vol. 1 by Kira Yukishiro
My rating: 3 of 5 stars

The kingdom of Nohmur has been a peaceful land for humans since the exorcists repelled the demons and sealed the way to the underworld of Ruhmon. Two sisters, Lys and Rin, are the heirs of the illustrious Shirano family, the most powerful clan among the exorcists charged with watching over the barrier and maintaining the balance between the two worlds withe the aid of Hikaten, the Sword of a Hundred Souls. One fateful day, however, with the neighboring villages suddenly coming under violent attack, the peace is broken… and the sacred sword begins to react to an unknown phenomenon.

In Nohmur, the barriers to another realm, Ruhmon are held by Oracles and exorcists, and the royal family, Shirano, hails from the first monk who used his blessed blade to eradicate or seal away the race of ‘demons’, bringing them peace. In present times, the Shirano priestess is the Divine Lys, and her younger sister, Rin, is an outcast to her own palace (despite the love and support of her older sister), who has one of the ‘demons’ Aghyr for a friend. When Lys disappears to investigate a threat, Rin is left with the responsibility of the sword and the kingdom, both things she was never trained for.

The story is pretty basic for now, with an unlikely princess being cast into a role she is unprepared for. Rin doesn’t know much about anything, and Aghyr is both a bodyguard and a companion for her, and it has both its upsides and liabilities. The sword responding to her is another thing she hadn’t counted on, and she doesn’t know how Lys is, or what is going on. The romantic tension between them seems fraught with angst and the fact that her people hate his very presence. The artwork is okay, I guess, but it is quite busy and cluttered. The story also starts in each chapter a bit further and then backtracks to let us know what is going on and how they got there, which feels a bit annoying if it happens every time. Overall, I am not super impressed with it, but I am willing to see where it goes.