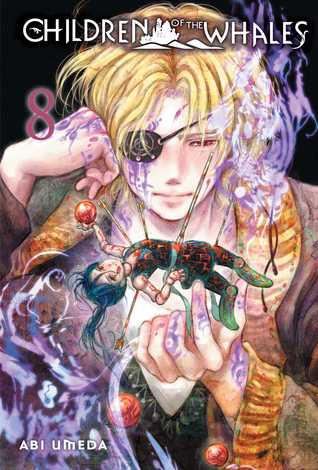 Children of the Whales, Vol. 8 by Abi Umeda
My rating: 4 of 5 stars

The promised haven of Amonlogia is closer than ever, but the dark history of the Mud Whale still poses a terrible threat to its people. Somehow, learning the truth about the past has freed Ouni’s thymia from all constraints, and he is forced to lock himself away to avoid hurting the others. But even with that precaution, his very presence is a danger to his people as imperial forces prepare to capture the daímonas and kill everyone else on the island!

With Amonlogia days away, the Mud Whale has a new set of worries. They have learned the truth about the Daimones, and it has simultaneously triggered Ouni’s powers to come back in an uncontrollable manner. As they are all looking towards their future, the Mud Whale is having their past pour out in a torrent. We learn about the fate of Dyo and Miden, about what the Commander Shuan is and why he is LIKE THAT, and a heartbreaking end for one of the secondary characters. Also, am I crying about the heartbreaking twist to Ouni’s story, with his desire to one day see the world aside from the Mud Whale being crumbled? Yes. The story on the Mud Whale is tinged with tragedy and the hope it nevertheless grew out of it. Meanwhile, over in the Empire, part of Orca’s past is revealed as we learn more about his current machinations. There seems to be a storm on the horizon for the Mud Whale, as they are unknowingly rushing into an ambush that could be set up by the Empire’s forces or their very existence being perceived as a threat by Amonlogia. In all, a volume that answers many questions about the past, and raises new fears for their future.

Is it diverse? neurodiverse main character