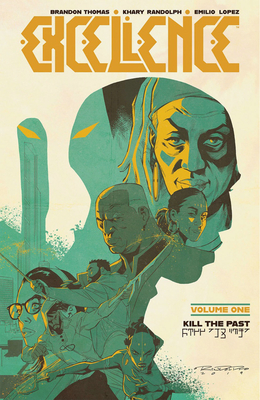 Excellence, Vol. 1: Kill the Past by Brandon Thomas
My rating: 4 of 5 stars

Spencer Dales was born into a world of magic. His father belongs to the Aegis, a secret society of black magicians ordered by their unseen masters to better the lives of others-of higher potential-but never themselves.

Now it’s time for Spencer to follow in his father’s footsteps, but all he sees is a broken system in need of someone with the wand and the will to change it. But in this fight for a better future…who will stand beside him?

KHARY RANDOLPH and BRANDON THOMAS ignite a generational war in this action-fantasy series, made entirely by creators of color, and committed to one truth above all others-Excellence is Real.

With the setting of a secret magicians’ society, and a generation war with a young Black magician out to challenge the system, this book was already something I was quite excited to read. The story is about Spencer, who comes from one of the 10 elite families who make up the Aegis’ tree of magicians; only the male members of the family are allowed to learn magic, and even then only for the purpose of approved causes. Each of the young men who advance are assigned a target – they are essentially unseen guardian angel magicians who make sure that these ‘targets’ have no speedbumps on their road to greatness. When Spencer wants to use the magic to instead help his ailing grandmother, he is punished by the Aegis and his father, until the time comes that he start to take matters into his own hands.

Spencer’s arc is a complicated one, filled with insecurity, daddy issues and poor impulse control. His journey is shown through his childhood and teenage years, as he continues to labor under a demanding father who manipulates him because of the former being late to come into his power. With a burden of family name warring with the privilege it provides, Spencer walks a thin line between being cautious and impulsive. His even more complicated relationship with his father’s protege, who should be like a brother to him, but was pitted against him, is a significant character arc that was explored quite well in this first volume.

The artwork is a vibrant chaos of colors, with dramatic lighting that sometimes helps and sometimes hinders the emotional value of the scene. The magic and action scenes, however, are perfect in their composition and coloring! The expansive world constructed into this story is shown splendidly by the art, and character design is so cool, I’m quite in love with the style!

Overall – an expansive story with attention to character arcs, combined with eye-catching artwork.

Is it diverse? Black main characters, made by creators of color