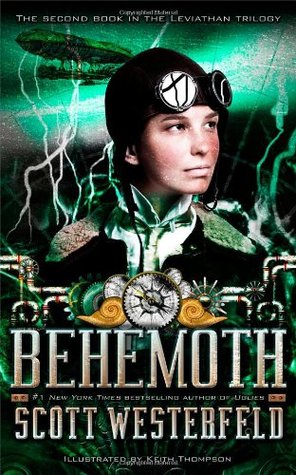 Behemoth by Scott Westerfeld
My rating: 4 of 5 stars

The behemoth is the fiercest creature in the British navy. It can swallow enemy battleships with one bite. The Darwinists will need it, now that they are at war with the Clanker powers.

Deryn is a girl posing as a boy in the British Air Service, and Alek is the heir to an empire posing as a commoner. Finally together aboard the airship Leviathan, they hope to bring the war to a halt. But when disaster strikes the Leviathan’s peacekeeping mission, they find themselves alone and hunted in enemy territory.

Alek and Deryn will need great skill, new allies, and brave hearts to face what’s ahead.

Instead of continuing the battle in Europe, Behemoth takes us on a journey to Istanbul where a revolution is brewing amidst the rising tensions about who is going to join whose side in the war. With Alek’s people having made a deal with the crew of the Leviathan, Istanbul is where they plan to escape the airship and move on to whatever the next part of their plan is. The British Air Forces are meeting with the Sultan to delay his entrance into the war on the side of the Clankers, and Dr Barlow is hoping to deliver that precious cargo to sway him. Alek and some of his crew gets away, but Count Volga remains behind, which puts Alek in an unfamiliar city with no allies unless he makes one. Meanwhile, Deryn, who learns that Alek ran away, takes a chance to slip away to help him, when a secret mission from the Air Forces takes her into Istanbul.

The focus of the story, while being on Deryn’s and Alek’s respective goals, is largely about the rebellion in Istanbul to install a democracy. Alek meets with the rebels and is happy to aid their efforts, since he feels he should help end the war however he can. Deryn helps for his sake, but she doesn’t put much stock in the rebels, nor in the daughter of one of the leaders, Lilith, who she finds herself jealous of. (Also, did I like the contrast of a girl choosing the same path of being in the air but with a different strategy? Yes!) One of the wonderful additions is the creature that hatches from the precious cargo, and honestly I want one of that Perspicacious loris! Deryn’s and Alek’s friendship grows stronger, as they strive to help out the rebellion, while Deryn is also trying to keep the rebellion’s plans from coming in the way of the Britisher’s planned attack. Team work makes the dream work, folks!

Anyway, it was another thrilling journey, and I liked the change in setting.

Previous books in the Leviathan series