Welcome to my stop on the blog tour for Song of the Crimson Flower! I was so delighted with the book and I hope my post delights you too! First, there’s a review, then an artwork of Bao and Lan, made by me! 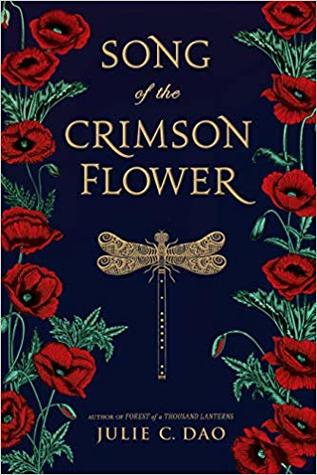 From the acclaimed author of Forest of a Thousand Lanterns comes a fantastical new tale of darkness and love, in which magical bonds are stronger than blood.

Will love break the spell? After cruelly rejecting Bao, the poor physician’s apprentice who loves her, Lan, a wealthy nobleman’s daughter, regrets her actions. So when she finds Bao’s prized flute floating in his boat near her house, she takes it into her care, not knowing that his soul has been trapped inside it by an evil witch, who cursed Bao, telling him that only love will set him free. Though Bao now despises her, Lan vows to make amends and help break the spell.

Together, the two travel across the continent, finding themselves in the presence of greatness in the forms of the Great Forest’s Empress Jade and Commander Wei. They journey with Wei, getting tangled in the webs of war, blood magic, and romance along the way. Will Lan and Bao begin to break the spell that’s been placed upon them? Or will they be doomed to live out their lives with black magic running through their veins?

In this fantastical tale of darkness and love, some magical bonds are stronger than blood.

Song of the Crimson Flower is a simple and beautiful story about two characters who start from a place of opposition and grow to love each other, against a background of a land in turmoil over a spreading threat. Bao, an orphan and a physician’s apprentice, has been in love in Lan, a highborn girl for a long time; when it is discovered that she has been duped by her fiance with his help, she is infuriated and rejects his love coldly and throws the difference in their status in his face. Despondent, he goes to a river witch to get rid of his memories of her, but instead ends up being cursed because of his mother’s deeds, so that his soul will reside in his flute unless he gets someone to proclaim love him. Lan, feeling guilty over how she hurt him, agrees to help him search for his mother in the Gray City so that the curse might be broken.

Their journey takes them through their kingdom, crossing paths with some characters we know well from the Rise of the Empress duology (it is not essential to read that series before this, but it is recommended), and a rising epidemic that has Ebola-like symptoms but is claimed to be cured by a banned drug called black anise. Bao’s parentage becomes obvious early on, so the question is how he will react to finding his family at last but having a ideology opposed to theirs. The antagonist themselves are created well – they truly believe they can help the world, and are ready to pay any cost for it.

The romance is slow-burning, and feels so right. Unrequited love is tricky to pull off so fast, but Dao makes it work so well. They each have much more to learn about the other, and on this journey where they are free from the binds of their societal status, they can truly see each other. And even then, the romance doesn’t overwhelm the story: they still have a city to reach and a curse to break, then a war to prevent, but their relationship grows through and alongside these arcs.

Overall, it is a different book from the Rise of the Empress duology, sure, but it is impactful in its own quiet way.

Is it diverse? OwnVoices fantasy story with Vietnamese characters

Also read these books for some context for secondary characters

Received an advance reader copy for the blog tour.

Julie C. Dao (www.juliedao.com) is a proud Vietnamese-American who was born in upstate New York. She studied medicine in college, but came to realize blood and needles were her Kryptonite. By day, she worked in science news and research; by night, she wrote books about heroines unafraid to fight for their dreams, which inspired her to follow her passion of becoming a published author. Forest of a Thousand Lanterns is her debut novel. Julie lives in New England. Follow her on Twitter @jules_writes.

Julie is represented by Tamar Rydzinski of the Laura Dail Literary Agency.