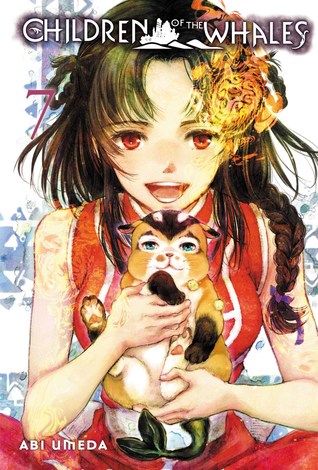 Children of the Whales, Vol. 7 by Abi Umeda
My rating: 4 of 5 stars

The Sea of Sand harbors many mysteries, and an encounter with one of them awakens deep memories of the past for the Eldest of the Mud Whale. But everyone is still reeling from the recently revealed harsh secrets about the true nature of the Mud Whale. How can Chakuro and the others handle the new knowledge these strange visions grant?

With the truth of the thymia and the Falaina revealed, our main characters are heading towards new lands on the Sea of Sand. But Aima has her own agenda and so far it isn’t clear what it is; at the end of the last volume, she was seen talking to the two kids who were big on anarchy, and in this one, she opens the door into a past that lets them see the origin of the Daimones. Most of the plot in this book is background, with the story of the first mayor of the Falaina, Dyo, being told in heartbreaking series of events. In the present, Chakuro and his friends have to piece together clues from the Eldest, the previous mayor’s diaries, and what they know of the Mud Whale, to find out the truth about the Daimones. The artwork in this one is lush, with sweeping panels full of details, and a backstory that opens up the world of this series even further. It is an enlightening, but also very sad, book.