I’ve started a new podcast, and am catching up on most of my older ones! 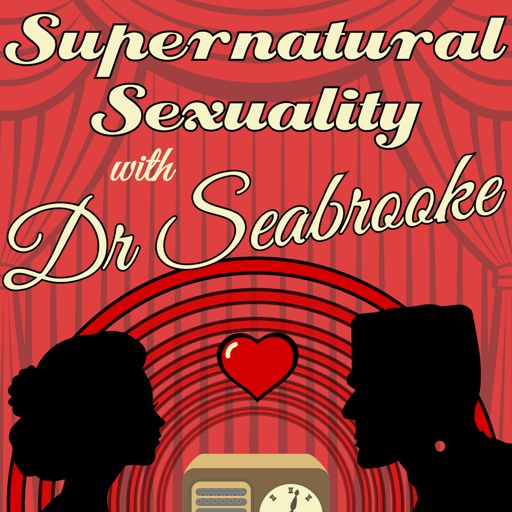 Supernatural Sexuality with Dr Seabrooke is a fictional sex and romance advice radio show set in a world where monsters are real. Monsters and humans alike call in to noted folklorist, sexologist and relationship therapist Dr Olivia Seabrooke for help in finding ways forward on the issues that spring up in relationships where people’s needs, cultures and bodies are radically different. The world can seem hard and hopeless, but on this show, there is always a way forward, even if it’s hard to see at first.

I was excited by this new podcast from the Love & Luck peeps!

This was more than I imagined a supernatural advice column to be – with Dr Seabrooke giving them counseling, not just advice, to deal with romantic problems. And what problems there are! A werewolf’s boyfriend is not sure why his girlfriend keeps him at a distance, a human turned ghost has to reconcile with the change in her relationship, and a vampire is getting back together with an ex he knew as a human.

“Dr. Seabrooke helps an astral projector stay present, a non-binary mothman frustrated at his species’ name, and a siren dealing with prejudice”

I am loving the focus on counseling than advice, as Dr Seabrooke suggests to a non-binary mothman to meet other people like them, and that their grievances are totally valid! The astral projector having issues with intimacy due to nervousness and anxiety was also a good one! And sirens (or any supernatural entity with powers to charm) being discriminated against was a nice take on the legend.

“It’s all hands on deck in Colorado. Sally Grissom’s been kidnapped. An ocean away, she matches wits with somebody new.”

Sally has been kidnapped by the Soviets, and is being asked to help out with their Timepiece project. Meanwhile, ODAR peeps are mobilizing to track her down, and Petra is emerging as a nice main character.

“Petra, Lou and the 77s infiltrate the KTNK stronghold to rescue Sally. But while inside, they might find more than they bargained for. They may have to pay a dear price to retrieve her.”

The mission to rescue Sally in underway, but there are a lot of detours and side jobs happening. Lou gets to meet Marian, who still stands by what he did. Meanwhile, Esther has to bargain with her contemporary in the Soviet version of ODAR, and the thing she gives in exchange infuriates Petra, who sees it once again as proof that Esther could become the person she had known in the future.

“Though they are glad to return to Point-of-Exile once more after a long mission, our heroes may not be the same people they were when they left. Some for the better, others… less.”

Ooh, this was a bittersweet episode, as prime ODAR characters are leaving the fold, after thinking back on how much they have given to the cause and how little they believe in it now.

“Welcome to the Season One finale! In this special hour-long feature, Captain Miles Chen undergoes an unexpected medical procedure, X negotiates a problematic cease-fire, Ra speaks out, and we find out what happens when you damage something you don’t own.”

With Caldwell and the Empress Conglomerate at their door, X and co are deciding what to do with it all, and the leverage they have. Mutiny isn’t looking so productive, but X wants to keep fighting, and without a body count. She doesn’t believe in the capitalistic bullshit the others are spouting, nor does she accept the authority of Chen or Caldwell, making it a tense situation. Perhaps the biggest surprise of the episode was Cyrus’ and X’s powers on display, because WTF.

“1920. Shortly before Prohibition goes into effect, two soon-to-be-unemployed bartenders in New York City find their friendship tested when one presents a dangerous proposition to the other.”

Nice take on ‘drinking as if it the end of the world”. A barkeep is searching for a vault as Prohibition is about to take effect, but he may be a bit over his head. The twist was predictable, sure, but did I scream? Yes!

Episode 4 – What Happens When the Beat Drops

“2019. In present-day Palo Alto, a negotiator must talk down a young man who is taking drastic and dangerous measures to fix what he sees as the soon-to-be-irreparable trouble with the world.”

At the start of the episode, I thought, ah yes, let’s recount everything bad that is happening around us, like we never forgot. A young white dude is holding someone hostage (never a good sign) on a premium streaming platform, while someone from legal is sent in to talk him down. Then the story takes twists and turns, as the characters’ morality and motives are questioned in turns, delivering one heck of an epilogue!

Eric and Rudyard competing with each other? Never gets old! And who would’ve thought Rudyard had dog whisperer powers?!

Why is Rudyard the way he is? We’ll never know because “Antigone will kill me for this, and she’s had years to think about how” lol. Georgie comes to his rescue, though, when he messes up a funerary last wish.

“Most of our life is spent looking for things. Companionship, security, even our lost keys. But above all of that is our search for answers, and the way human beings have tried to find them has lead to all manner of frightening situations.”

Mainly about divination, but more about solving crimes through divination in the pre-investigative times. Trial through blood is the main focus of the episode, and to be honest, I had never really heard of it, so it was interesting to know about.

“A family is formed. A journey begins. A new era dawns. And out here, past the boundaries of City or government or law? Nothing stays guaranteed for long. Everything can change — so you’d better hope you can keep up, or you might just get left behind. It’s crime time, baby. Let’s go.”

The penumbra is back, baby!!!! So, Buddy’s ‘family’ now has her, Vespa, Jet, Rita, Juno AND Nureyev, the latter of which is trying to prove his skills (his resume is a bit lacking, on account of being a nameless thief). Buddy assigns them the first mission of getting a Gilded Globe from a rich socialite, Nova, at an auction ball, and she sends them as a newly married couple (I see what you are doing there, Buddy!) Juno is wearing a huge golden dress, and being quite conspicuous, much to the irritation of Nureyev, who is voicing most of the narration. By the way, it was so fun to hear from his view, because he is like ‘I am so cool, the coolest thief’ outside and inside he is like ‘Juno is a thing I need to put in a compartment in my head and lock away because I can’t be distracted dammit’.

When Nova buys her own item on the auction in a surprise upset that deprives Juno and Nureyev the chance to do so, they move on to plan B, as in, stealing it outright. This means Nureyev gets to showcase his thief skills, and is this man dramatic! Juno comes to his rescue though when he messes up a bit, and then Nureyev manages to steal AND scam! I was laughing so hard at the scamming bit, to be honest! Oh, and cherry on cake was the mom talk Buddy has with Nureyev after the debriefing, and also the heart to heart talk Juno has with him.

“We’re all going to live forever and there are no downsides or hidden consequences.”

As the town gets swept up in the cyrogenic brain freezing scheme, Cecil is also trying to get into it, so that he can live with Carlos forever (who, by the way, is understandably skeptical of this whole mess). Not being ageless anymore is hitting everyone hard, but then the truth about the scheme comes out through a time traveler (who, when revealed, made me scream I KNEW IT!)

Episode 97 – When It All Falls Down

“A disturbance at Howard Ford Beauregard The 3rd’s is the talk of The Sammy & Ben Show.”

HFB3 has been burgled by the robots running around, and his tirade interrupts a scolding by Mary as she roasts Troy over coals for making her Tim a deputy without any training. I don’t know what Ben and Sammy expected by asking HFB3 to co-operate with them – he has spent centuries being selfish, this isn’t gonna change by two radio hosts or ever, for that matter. And also, this is kind of why I felt this episode was a wasteful filler – there was nothing much going on, and maybe this is just to delay plot for episode 100, but gah, enough wasting our time and patience!

Freyja has found another commune in Mexico, but where the focus is on religion and starts to wonder at the power of belief and religion as a unifying factor, as the Cradle doesn’t subscribe to a god. She, however, also realizes that this wouldn’t be looked upon kindly by the Cradle.

She has found someone to help the Cradle, in the outside world. I was skeptical of that person, but once I heard about reprogramming centers, I was like, huh, common enemy.