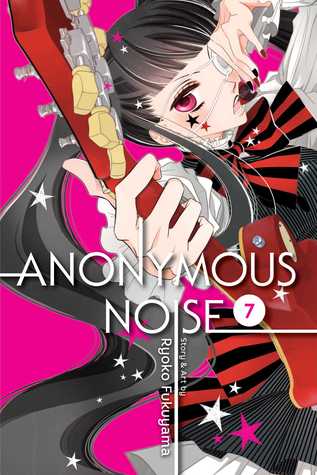 Anonymous Noise, Vol. 7 by Ryōko Fukuyama
My rating: 4 of 5 stars

Nino takes the stage at the school festival, ready to deliver the message held fast in her heart. Both Yuzu and Momo have composed songs for her, but which piece of music will be the one to awaken her? Meanwhile, Kuro’s secret feelings seem to have reached a turning point as well… And is In No Hurry finally ready to take things to the next level professionally?

This volume managed to bring back my interest in the main love triangle, as Yuzu pits both his and Momo’s songs against each other in an effort to ‘wake up’ Nino who has been morose since Momo’s second disappearance. Most of the story takes place at the school festival, where the pop music club is performing a concert of four songs. Miou steals the show with her voice, but ‘Alice’ grabs the audience with her power, and you know what, I could feel that energy vibrating in that room reflected in the artwork. Nino’s performances usually have a backdrop of emotional turmoil or self-realization going on, and while it started off that way, she slowly is beginning to walk on the path of her own voice. And the feelings both the boys evoke in her through the way they write songs for her was so well done! Aside from Nino’s arc, we also learn more about Yuzu’s and Momo’s complicated relationships with their abusive mothers. And as for In No Hurry, they are about to embark on another new stage in their career. Overall, it was an intense and gripping installment.