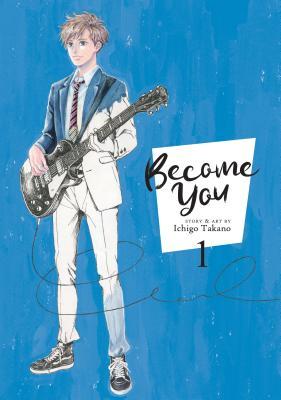 Ashie Taiyou is a high school musician with dreams of stardom, but when his bandmates quit on him, it feels like his dreams are slipping away. In an act of desperation, Taiyou strong-arms his sullen classmate Hikari into forming a band with him. Can the two boys turn their dreams into reality? Creator Ichigo Takano–of orange and Dreamin’ Sun fame–collaborated with band Kobukuro around the song Kimi ni Nare in Japan, creating this manga as part of a multimedia expression of hope for a brighter future.

A new series from Ichigo Takano? Of course I was excited! And obviously, this one too pulls at your heartstrings eventually. Its about a teen boy, Taiyou, who wants to be a musician but is terrible at it, and also now doesn’t have a band. He pesters his classmate, Hikari, to join him – the latter being some sort of prodigy who stopped playing music. Most of the story is about Taiyou trying to be better and him trying to make friends with Hikari. They have an awesome dynamic – like a friendly puppy and a grumpy cat; also I love how their names complement each other! We get Taiyou’s backstory in this volume – about why he is so adamant about becoming a musician, and we get hints that there is something heartbreaking in Hikari’s past, too. I still feel a disconnect between Taiyou’s past and his current actions, but hopefully it will be resolved in future volumes. The artwork is the same as Orange – it is beautiful, but those eyes seem odd to me, I don’t know why.

Overall – a nice introduction to another probably heartbreaking series.

Others books by the author in the Orange series